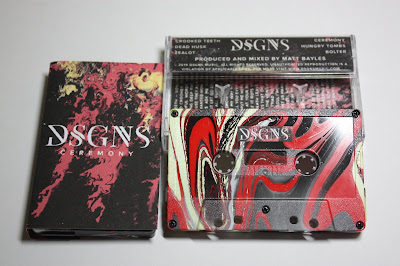 DSGNS have existed for almost a decade but I didn't find out about the Austin, Texas metallic hardcore band until 2019 when they emailed me about their upcoming EP 'Ceremony', which kicks major ass and got me interested in their back catalogue.

In 2012 the band released their first two EPs, both housing four tracks each. 'WSTLND' was released in January and is anchored by very dark and primal vocals that fall somewhere between black metal and hardcore. The standout track has gotta be "Champagne Man" and the chuggy, driving instrumentals that back the vocals better than the previous track, making it sound more metalcore than black metal. On the opposite end of 2012 DSGNS released 'LXCN' which continues the pikey Circle Takes The Square vocals but the instrumentals and recording/mastering of the instrumentals really take this EP up a level. Things are apparent from opener "Denial of Service", get pretty straightforward hardcore on "Bukowski", post-hardcore on the title track "LXCN" and use the closer "Long in the Tooth" to knock it out of the park, bringing to mind the sick German band Llynch.

The next year they released two songs on an 'Uglytwin split'. These two songs take things deeper into the hardcore/metal subterranea, hitting more of the math metal and adding sludge and a bit of doom to the mix. The vocals also definitely take a step in the right direction here, ditching the pukes for a dark, throaty scream. There is one original and a cover of "Oh, James" by Blonde Redhead. Speaking of covers, 2015's 'Sexed and Bloated' are two Stone Temple Pilots covers, which is pretty gosh darn sick. It's funny, the two covers of "Dead and Bloated" and "Sex Type Thing" sound almost like Graf Orlock covering the 90s alternative all-stars/trainwreck.

The lone DSGNS full length 'Hexes' was released in 2015 and is the crowning achievement of the band's first sound incarnation. Featuring 12 songs and released on 12" by Pluto Records, the speedy metallic hardcore borders on bands such as Botch, The Bled, Converge and The Abandoned Hearts Club. "13" is definitely my jam as it bears quite a bit of resemblance to Curl Up And Die, but "White Crosses", "Nothing Pretty to See Here" and "Let's Get Invisible" are a few other notable bangers.

The band's final release for a whopping four years was the 'Venomspitter split' 7" featuring two new songs that may very well have been recorded during the 'Hexes' session, but parts of "Chemical Peel" show up on their 2020 release and "" is another song the helps bridge the gap between the old releases and the newest.

After four years of recording silence, DSGNS switched vocalists on 2020's 'Ceremony' by picking up Daniel from Thumbscrew fame. This very slight lineup shift has helped bring the band into a sound that fits like a nice new jacket that was tailored just for them. The vocals are now straight up punishing, sometimes bordering on that Thumbscrew shriek, and the instrumentals/recording bring all the good stuff to the forefront. Opener "Crooked Teeth" blasts through in 1:43 of manic, pulsating metallic hardcore, followed directly by the very Lavotchkin-esque "Dead Husk" that houses a behemoth of a section at around the 45-second mark that sounds kind of like death. "Zealot" is a banger that the band made a sick music video for and the title track "Ceremony" is an unstable, nightmarish and brooding song that has some of the best and most diverse moments on the record as well as some synth work (done by Matt Bayles, who also recorded the record. "Hungry Tombs" is another quick banger and closer "Bolter" is my favourite cut, dishing out some seriously punishing hardcore in the vein of Deadguy, Stuntman but with multiple vocalists and an ending not unlike Norma Jean's "Memphis Shall Be Laid To Waste".

Not only did DSGNS release 'Ceremony' on cd in January, but Tomb Tree Tapes and the band just released 60 cassettes over two very nice variants. And on March 19th there's a Prosthetic Records/Mathcore Index Showcase in Austin with a plethora of friends including: Olam, Meth., Amygdala, For Your Health, Glassing, Shin Guard...cripes that makes me weak in the knees. Here's the poster. Can't wait to hear what you've got cookin', my friends. 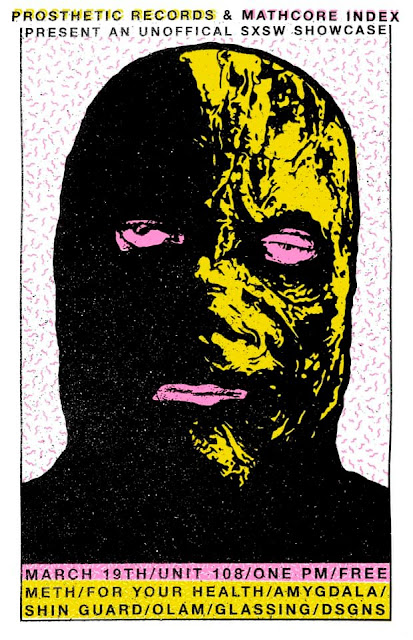