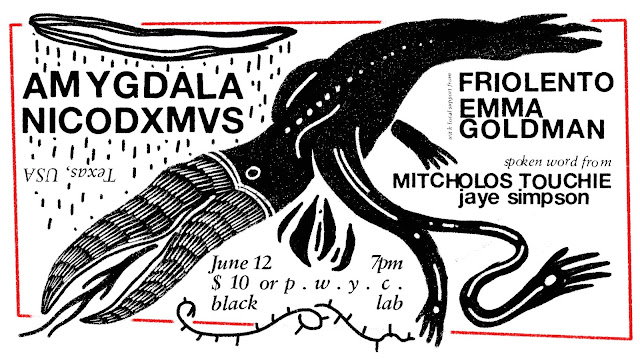 Less than two weeks after ZBR Fest 2019 I returned to the mainland to see a very stacked show which did not disappoint.

EMMA GOLDMAN
This three-piece from Vancouver are fucking amazing. Without a doubt the most "screamo" band in Western Canada and the bestern one to boot (ha). Playing three unreleased songs and few old ones, the primarily ex-members of Dad Thighs (+ Pavel <3) got me outright giddy for their next set of recordings.

FRIOLENTO
Another band fresh off of playing ZBR Fest 2019, the local three-piece brought a mixture of poetic spoken word in between bursts of blazing post-hardcore.


NICODXMVS
Admittedly, I don't listen to noise/drone/ambient music, but I did enjoy this set and found it to be both mesmerizing and haunting simultaneously. Very cool stuff.


AMYGDALA
I hadn't seen this west coast band in years, and it was heart-warming to quickly engage in friendly conversation with them, including new drummer/former member of Ruptures and Led Astray. They may still be the same in the fact that they are super nice, but their live show has changed dramatically, and I mean that in the best possible way. Bianca's vocals are top-fucking notch and are enough to perforate anyone's eardrum that makes the grave mistake of not wearing earplugs. The instrumentals are driving as hell and help lead those anguished, shrieky screams that take it all to the next level. That shit was devastating, holy smokes.