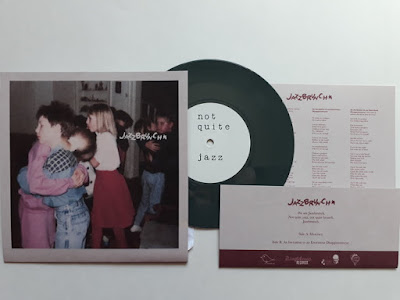 When Arvid from Vi Som Älskade Varandra Så Mycket sent me the masters for JAZZBRUNCH out of the blue, I was blown away. Hence my involvement in their debut 7" 'Jazzbrunch' which officially was released on August 1st. A week or two ago Captured Howls blog premiered their debut track/music video, and today I am stoked to bring you the second music video for the b-side "An Invitation to an Enormous Disappointment". Check it out below!


(2019) JAZZBRUNCH "An Invitation to an Enormous Disappointment" (from 'Jazzbrunch')
This second track begins with a semi-ridiculous piano intro that then flows very smoothly downstream with the post-rock instrumentals. 30 seconds in you'll hear Arvid's anguished screams, and by the one-minute mark that double-bass and epic post-hardcore take hold and, in typical Vi Som Älskade Varandra Så Mycket style, guide the listener through an emotionally charged minute before settling into a dark second-minute. The eerie, slow-build is reminiscent of late-era Envy and eventually fades out at 3:35, only to kick back in to that driving hook. It is definitely worth mentioning the exceptional use of keys in this song (as well as their other one), as at 4:40 shit gets climactic as all hell should probably be used as a movie soundtrack at some point. Hot damn, what a debut EP, and thanks for two music videos...cuz I love music videos!!!

Jazzbrunch is a Swedish/American band. We are:
Sebastian Engström on drums, from Totem Skin and Vardagshat
Scott Ritcher on bass and piano, from Metroschifter
Arvid Ringborg on vocals, from VSÄVSM
Johan Angantyr on guitar, from VSÄVSM
Mark Shaw came up with the name and will play guitar if we continue, from VSÄVSM, Khayembii Communique and Song of Zarathustra

1 - Why the name Jazzbrunch?
Mark saw a poster about a restaurant serving jazz brunch (brunch with jazz music) and we thought it was funny and sounded like a terrible idea. Then we were joking about how it would be funny to have a band that played extreme music but had such a bourgeois name. This was years ago, so it was kind of a joke that stuck.

2 - What were your collective influences on these two songs? Was there a theme or general idea that you were shooting for?
Me and Johan have been talking for years about doing something outside of VSÄVSM that is a little bit heavier and maybe in English. The studio where we recorded the new VSÄVSM 12” needed a few months to move, so we had an opening.

We both really like Totem Skin and Sebastian’s drumming, so we reached out to him and he was interested. Then we asked our friend Scott, from one of my all time favorite bands Metroschifter, and he thought it sounded fun. Mark was also in, but had to move the weekend we went to record.

Johan started to write songs and then we worked together with the arrangements. Then we sent the demos to Sebastian and Scott. We all met up in a studio in Linköping where we recorded unrehearsed. It really is a studio project, but I kind of like that.

The initial thought was to play some kind of black metal, but that is probably not an accurate description of what came out. We write the way we do and you can totally hear a little bit of VSÄVSM in it. I really like how it turned out.

We like a lot of records Jack Shirley has been involved with, so we reached out to him to do the mixing and the mastering. Compared to our process with VSÄVSM this was really quick.

3 - You made two music videos for the EP, can you delve into those?
I had just digitalized an old VHS tape with videos of me and my friends trying to look metal in our early teens. It is both embarrassing and hilarious. We thought it was funny with a video of a bunch of kids trying to be metal to the music of some adults trying to play metal. When I was a kid we would make music videos of other bands’ songs, so this is actually footage from three videos: A Nirvana, a Metallica and an Alice in Chains song. This became the video for Idiocracy, but it really has no correlation to the lyrical theme.

I really only meant to make one video for the band, but when I found the old footage I had to do something with that. I had already planned the other one that became the video for An Invitation to an Enormous Disappointment. I thought it would be funny with someone in corpse paint doing mundane stuff like buying groceries and riding the bus. I developed the idea a little bit to have three separate stories: the nihilistic hobo kid, the boy in his rabbit suit with his rabbit and the sad, black-metal guy doing boring stuff. My girlfriend’s kid Gabriel is in the video and my friend Shervin aka The Persian Anaconda from Careless is also in it.

4 - Tell us about the dual lyrics for each song in the 7" jacket, cuz I think that's hilarious.
I played the songs to my girlfriend, who is American, and she could not hear what I was singing.  I asked her to write down what she heard and we decided to put her interpretations in the jacket. We thought it was really funny, especially since I sing in English.

5 - What is next for Jazzbrunch? Any shows? An LP?
We don’t know. This was thought of as a short project, but we all like how it turned out. Johan wrote three more songs right after we recorded that are killer, but our focus shifted back to finishing the VSÄVSM record. We are done now and it comes out in October, so maybe we will find some time to do more Jazzbrunch stuff.

Thanks for helping us put it out and I hope you all enjoy it!
Posted by Dave Norman at 11:50