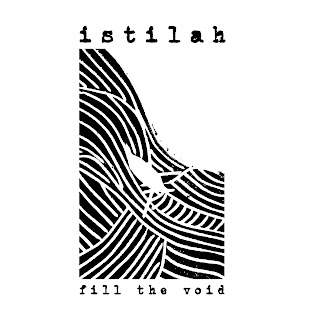 If you've been following this blog you'll likely have come across a few posts gushing about ISTILAH. I first heard the three-piece Singapore screamo/emo-violence band when my friend Jörg (Machina Rex, Yung Nat$, Swallows Nest) showed me in a podcast that we did together back when I lived in New Zealand (check it out here). The song he showed me is titled "Lightning in a circle" and can be found on the band's 2016 'Demo'. The four-song debut EP is excellent, utilizing classic screamo/emo-violence riffing with desperate screams that comes off sounding very Japanese and I fucking love it. Opener "Never again" hits the Orchid meets Yarmulke vibes nicely while "Nothing" climbs like Indian Summer before rooting to a sick groove. The same year they released another two tracks on the 4-way split w/5000, Ilill and Rûth including "Time will tell" which is a cool jam tail-ended by an outro that is very, very Suis La Lune.

It was 2018's 'Fill the Void' that pushed me from like to love, as the eight tracks take a slightly more aggressive approach which makes the Japanese style so much more obvious, whether intentional or not I don't give a damn cuz I've been eating this shit up for over six months. There are some very cool vocal patterns in "Listen Now Listen" that start about 25 seconds in and drives the music during the pulsating ridiculousness preceding the Yage-esque at close. There's a ton of cool stuff in "Apartheid", including the eerie/swirling section about 30 seconds in and a sick, epic palm mute midsection that is easily one of my favourite parts on the record. "Crisis Point" has a frantic opening that slides into a nice groove with an added, high, dipping guitar riff while "Between Trees" does much of the same chaos before doing dreamy emo for final half. "Unjust" is fire and doesn't let up for its two-minute entirety and boasts a really cool ending that is rooted in a guitar ring-out over drumroll that first hits at 1:08.

I don't know what ISTILAH is doing next but I'll be all over it when it comes out.