Label(s): Self Released / Hyperrealist / At A Loss Recordings

I first heard THE BARONESS sometime between 'First' and 'Second'. Yep, before they did the colour albums they did 'First', 'Second' and a split with Unpersons which is also called 'Third'. I will make it known now that I am not going to tackle anything after 'Third' which was when the Blickle brothers, their original guitarist and drummer left the band and took all the awesomeness with them. In fact, I saw them in concert with the almighty Mutoid Man in 2016 and the opening act put the "heavy" and skull-centric art from THE BARONESS to shame. So yeah, I am not a fan of the transformation that this band went through. At all. Woah! And I just checked their bandcamp page and they don't even list the three early releases!!! Fuck that shit.

But holy fuck the lord jeebus shmiste are the first three releases stellar. The songs are generally quite long, include some nice builds and very interesting interludes, but most of the time the band is either shredding to the gnar or burning down your family tree with some seriously heavy and crushing riffs. There are a fair amount of instrumental sections but when shit starts poppin' off you'll likely hear two vocalists screaming/growling at each other, making every piece of the puzzle fit so nicely together. If I had to make a few band comparisons, the most obvious to me is an amalgamation of the very well-known Cave In (their earlier material, though) and Back When (the 'Swords Against the Father' 7" and 'We Sang as Ghosts' 2x12") to create a complex, all-encompassing, staggering, grooving and powerful style or metallic hardcore, likely using wizardry learned from a fantasy novel soaked in acid. Yeah...it's fucking awesome.

'First' opens with "Tower Falls", obviously crushing and well-versed in crushing metal, it busts out the vocal chops after a minute and dive straight into some banging and intertwined guitar solos. The song rampages about for 7:10 and includes quite a few different parts, making it the blueprint for the first three releases. "Coeur" is next, being the shortest track by the band that I've heard at only 3:19, but that doesn't stop it from being unrelenting and bursting with riffs. Closer "Rise" is a decent track but doesn't hold a candle to the first two. All in all it's an excellent debut and only fails from being ridiculous because the next EP surpasses this and then some. 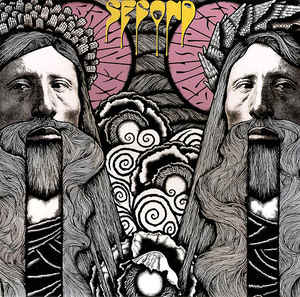 And then...holy shit, 'Second' was released in 2005 and I became fucking smitten. Seriously this EP is the standard to which all other BARONESS records fall short of. It's just that good. The heavier parts are heavier, the mathier wizardry is turned up a few smoking bowls and the attention to tying it all together as a ornate, complete and jaw-dropping package is second to none. The first of the three songs is "Red Sky" which swings in with a ridiculously catchy guitar riff that hooks the rest of the members who join in on the fun only to abandon it at 50 seconds in order to smash the listener into the floor. The thickness of the riffs and cavernous bellowing are astounding and the track eventually breaks under its own weight at 1:33 only to cycle through again with more parts (including a sick, sludgy climb around the three-minute mark) until its 5:45 close. "Son of Sun" has a lengthy but very engaging introduction that fans of Isis will likely dig, as it weaves in and out of groovy bass lines, ambient and expansive guitars and rolling drums for the first 2:10 before the instruments take a step forward each and then crash together in a glorious wall of metallic hardcore. Just before three minutes the deep and gutteral vocals take the stage and become the focal point, then start to recede and are replaced with substantially separated chugs, and by 4:50 everything blasts back in full force. The section starting from 5:34 is definitely more of a prog and post-hardcore/post-rock part, but it's also one of my favourite moments on the album, especially when it transitions at 6:07. Closer and the penultimate BARONESS experience is "Vision" aka my fucking jam. Those Middle Eastern guitars are as fluid as you can get and the instrumental opening will have you humming along for its 3:50 entirety, especially after the harmonizing and obvious build from 2:45 onward. When it hits hard after four minutes chances are you shall no longer have a face. Yep, like that. Those squealing guitars and haunting dual vocals make this part downright nightmarish but the songs begins to sound more positive right before the five-minute mark as the guitars climb to more dizzying heights and bring the song as well as the EP to a sensational finish. This is one of the best EPs I've ever heard, so do yourself a favor and at least give it a chance.

Their final decent output was a split with Unpersons also known as 'Third' in 2007, the same year the band exchanged members, signed to Relapse and started releasing the color albums, beginning with 'Red' that same year. The split houses two prodigious storms that clock in for a total running time of over 18 and a half minute! The first is "Teiresias", a commendable extension on the style perfected on 'Second', complete with dark, sludgy riffs, booming drums and those perfectly played guitar noodles. Definitely take note at 59 seconds when the guitars begin to race and hit a stride at 1:19 that takes an elevator up until 1:45 when everything climaxes and Isis on speed begins. The dip and subsequent guitar wankery at 2:54 and again at 4:18 are right up my alley, and probably my favourite part of this "final" release, although the final transition at five minutes if pretty dang dank, too. Our final song of note is the extremely lengthy "Cavite", which is a whopping 12:11 of doomy, sludgy and technical metal/hardcore/rock that hits everything the band had already done and so much more, giving an indication of the kind of stuff that might have been written next had the band not changed members and sound so much.

Alas, that was the end of THE BARONESS as I knew them. Cuz then...bleh.

The Not So Good Material (Bandcamp)