GRIP released their first offering a few months back titled 'Early Iteration' on Tomb Tree Tapes. It's 9 tracks of sinister, brooding, epic blackened hardcore...or is this black metal with hardcore elements? Good lordy lou I dunoo. It is an excellent debut that shows hella potential, with this release falling on the somewhat lo-fi side of things, sounding like an early incarnation of Isis and Circle Takes The Square. The songs are generally quite long with only a few exceptions, adding up to an average of nearly 10 minutes per track. 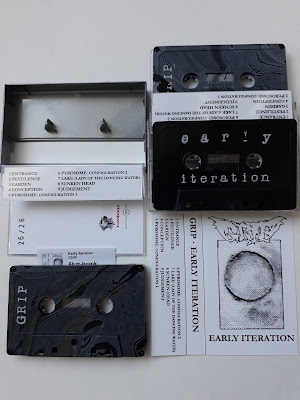 'Early Iteration' opens with "Entrance", a spine-tingling, feedback-soaked introduction that throttles the listener for more than seven minutes, with an excellent climax erupting around the four-minute mark. Next up is "Pestilence", a four-and-a-half minute romp through one of the most dense and cohesive songs on the record. There is zero build-up on this one and GRIP goes full tilt until a brief rest at 1:40 that is over all-too-soon, and the destruction continues until the song eventually implodes like the flailing, involuntary movements of a dying creature. Woah, dark stuff, Dave. Well fuck, the song is called "Pestilence". But don't fret because "Garden" is next, and the tranquil interlude sounds like a medieval acid trip set to ethereal, instrumental guitars. "Conception" is probably my favourite of the 9, as over the course of 11:39 the band takes the listener on a diverse but wonderfully structured adventure. It begins with grooving instru-metal intro that has some Pelican and Finger Of God vibes, expanding and increasing in speed and volume until 2:07 when everything explodes in a deafening blast of what may or may not be Buried Inside influenced post-hardcore/post-metal/doom. The subsequent seismic shifts and unrelenting pace is unmatched, and thankfully canvasses nearly the entire track. "Pyrosome Configuration 1" boasts impressive riffery right from the get-go, while "Pyrosome Configuration 2" opens with some seriously jazzy and dare I say screamo-sounding guitars over the anguished screaming, reminding me most of Suffocate For Fuck Sake. Looking for a behemoth of an interlude? Well holy shit "Lake (Lady of the Dancing Water)" is 13:56 complete with piano, singing and tons of ambient noise, etc. so enjoy that adventure. "Sunken Head" is another song that opens with a lot of confidence and an ever-evolving build with a nice payoff. On this song, as with a few others, there are some really good guitars that don't have the oomph and hook that I'm sure they would with a crisper recording and mastering job. Closer "Judgement" opens with a chill atmosphere before switching over to nightmare-mode at 1:30. By three minutes we are met with the heaviest, perhaps sickest part of the LP that crashes down in waves of apocalyptic black metal.

I know the Philly-based two-piece is playing shows in and around their hometown and surrounding states, so hit them up for shows! ====> gripxphilly@gmail.com