I was told to check out GAMENESS by my good friend Jesse Mowery way back when we went on the first MRTEX tour...and about five year later I finally came to my senses (or maybe it was that I finally had time) and skimmed the surface. After hearing "Low Waves" I pretty much lost my shit and fully immersed myself in the amazingness from France that was GAMENESS.

The earliest recordings that I've stumbled across are the tunes on 'A Gift to the Victims' LP from 1999, which came out three years after the band's inception. It's pretty metalcore and not my thing. Same goes for 2001's 'No Unusual Reaction', but this one has some slight transitionary sounds, most notably early Poison The Well and perhaps a hint of screamo. 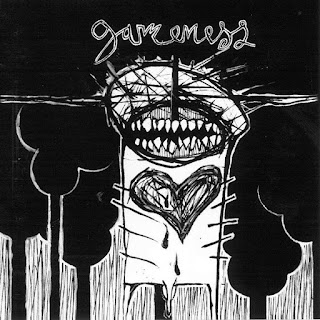 2003 was a breakout year for the killer sound that I associate with GAMENESS. Their four-song EP 'The All Seeing Eye' breaks away from metalcore and into sassy, screamy hardcore not unlike The Death Of Anna Karina and Killed By Malaise. The delivery of the vocals is all over the place, as the sassy spoken word is reminiscent of later Orchid but the higher pitched, harrowing screams lend an ear to Croatia's Mališa Bahat. It's that self titled LP 'Gameness' that takes the cake as the ultimate release and is this reviewer's favourite by far. Things get screamy and precise right from the first track "Crève la Fin", including a semi-experimental second half. "Émergence" long and epic (6:54) and is slightly reminiscent of Terry Green and Cougar Den. "Il Ne Reste Rien" has strong ties to French screamo such as Daïtro, Mihai Edrisch, Dodewaard and Amanda Woodward and even dips into Japanese-esque screamo by the end. "Another Part Of Decadent Organisation" is a catchy fuckin' tune and calls back again to The Death Of Anna Karina, especially with the sass and screaming combination that always has me dancing around by the end. The conglomerate, instrumental hook that is "It's Difficult to Smoke With Bo" sits in the middle of the album, giving the listener a slight breather before the behemoth "Present Day Present Time" kicks in for 5:20, complete with an additional string/orchestra section. "Low Waves" is next and is fucking ridiculous. It is the hardest, fastest and most aggressive song the band ever produced and it's like Orchid on speed, aka Loftus. Mmmmm, so tasty. "Réthorique de Destabilisation" is next and is another dense banger with a substantial breakdown 50 seconds in that was no doubt inspired by Amanda Woodward while closer "Sinous Passenger" is a trippy, mostly instrumental goddamned nightmare.

The band's final output came in the form of two songs on a should-be legendary split with 'AmenRa, Vuur & Gantz' and is a fitting conclusion to one helluva band. "Ressucite Et Remeur" is six minutes of massive movements with multiple, driving supernovas along the way, while "Immobile Destinee" is almost half of the time of packs no less of a punch. I really wish there were more songs here but alas they disbanded shortly thereafter, but three members continued on in Brume Retina so hit up Jesse's review of that here.

What's the moral of this story? Always listen to Jesse Mowery.

(2003) GAMENESS - "Another Part of Decadent Organisation" (from 'Gameness')