I came across EMA CAMELIA on The Poet You Never Were blog...cuz I raided that thing a few years back (as should you) and found this absolutely beautiful, dark, synthy, screamy hardcore with black-metal, sludge, industrial and goth elements from Czechia. The first time I heard "Jsou hra" I was convinced I was listening to The Flying Worker's new band that played the same music for thrice the length. Alas, I was mistaken. But it sure as shit sounds like it. 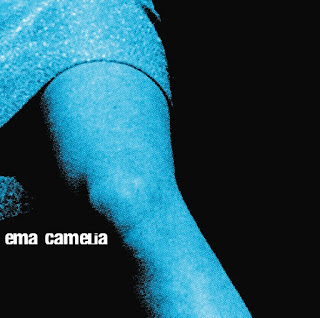 The band's first release (and in my opinion their crowning achievement) was their 2006 self titled full length 'Ema Camelia'. It opens with the incredible "Jsou hra" which is very The Flying Worker but longer, drawn-out and more epic. The song eclipses the six-minute mark and does so with a very awkward and prominent death scene audio clip, followed by feedback and subtle, floating guitars. The drums then kick everything off just after 1:30 with a wall of synths, guitars and bass. By two minutes the song takes a step back and utilizes a phenomenal guitar progression that really brings June Paik, The Flying Worker and early Funeral Diner to mind in the most complimentary fashion. "Záře" follows a similar path to the opener, but is much more relentless in its assault, opting to dump the synths and roll the bass through the song's entirety, giving it an eerie, subterranean and unstable foundation. Simply put, "Glasgow coma score" is fucking sick. Why? Because it's so fucking The Flying Worker. Yep. Synthy. Black-metaly. Guitary toney. The Flying Workery. It's got it all, although one could probably argue that the keyboards get a little grating at times, much like my excessive use of the letter "y" in the previous few sentences. "Strach" is pretty long, clocking in at 6:37 and it's slower and moodier than the other tracks, making excellent use of piano and subtle notes to build a massive storm that explodes at 2:30. "Bez křídel" is an instrumental interlude, or so it seems to be for the first three of its four-and-a-half minutes, with a conclusion resembling early Funeral Diner, Closure and ...Who Calls So Loud, aka glorious. The final song is called "Pláče" and it does the least for me on the record, as it goes a little too hard on the synths, for my taste at least. It isn't without its strong points, though, as the shrieks here in particular are so deep and gutteral - I need more vocals like this in my life.

After three years EMA CAMELIA released 'Krakatoa', and very quickly it is obvious that The Flying Worker influence has nearly completely dissipated and been replaced by something else. Whether or not it actually is Lara Korona is beyond me, but the similarity in sound is definitely there. I am unsure why, but the album leads off with my least favourite track by the band, "Na cestě" which truly seems like a different beast, and I'm not into it so much. It's darker, looser and less powerful, but "Veřejný přítel" is completely different and much more in line with what I expected from EMA CAMELIA. The intro instrumentals tap into ambient, atmospheric post-hardcore/post-metal that lead the listener into the throes of swelling riffs and towering yells, not unlike late Examination Of The..., Tel Fyr and Neurosis. Once the synths meet up with the rest of the band it takes on a bit of late Isis feel until its 8:00 close. "Dítě Krakatoy" is an absolute banger, with an opening fit for the likes of Envy and Daïtro, that builds and erupts into its second half around three minutes in. I think Suffocate For Fuck Sake is a pretty good comparison for the second half, cuz that shit is absolutely huge, eerie and crushing. Second to last is "Ovoce vlastní zahrady", a head-bobbin' good time with both vocalists trading gutteral growls and piercing screams back and forth. Closer "Jáma" is a peaceful and haunting trek through post-hardcore/post-metal/screamo ala Envy, Aporia, Lakmé and Viva Belgrado. That close with the dual screaming and prodigious instrumentals that climaxes at 5:35 is incredible.

So in the end EMA CAMELIA disbanded officially in 2014 after more than 10 years together, leaving behind one hell of a debut self titled as well as a well-crafted and complete final LP.