I recently unearthed my copy of A QUIET NIGHT...'s 'Demo' cassette tape, originally released back in 2005, for this review. Well, that's what the post will be listed as, but in reality this is the story of Adam Ohnono and how that wonderful French Canadian screamo machine changed my life.

So, I went to a Hot Cross show in 2005 and after picking up a t-shirt from the band and witnessing Holy Shroud fucking kill it, I meandered over to the small distro table with a fella by his lonesome. I was pretty new to screamo, getting into it initially in the summer of 2002, so I knew about a lot of Level Plane and Ebullition screamo but hadn't really branched out to other labels at that point. He told me that he had come on tour from Montreal to Toronto with the band, as he knew Josh Jakubowski and had recently released a Canadian version of The Now's legendary EP on 12" (which I obviously bought). I told him the kind of stuff I was into (primarily Neil Perry, Off Minor, Orchid, Funeral Diner and City Of Caterpillar) and he made a few recommendations that have coagulated into the most important purchase of my life. First, he pulled out the June Paik 'Demo' 7" in that fucking box with a cutout picture on it and told me it was unreal, German screamo. June Paik? Who the fuck was that? So I picked up that monumental 7" that is still my favourite release by the band. He then handed me a 7" and a 3" discography cd from The Flying Worker and said, "This is like Orchid but darker and with synths." Okay...I trust ya. And thank science I did. Lastly, he pulled out a die-cut 12"LP from some rando band called Ruhaeda. He said this is dark, chaotic-as-fuck screamo that you'll love if you like the crazier Neil Perry shit. And he was right. Oh my god he was so fucking right. No recommendation by a stranger has ever introduced me to so much unreal music with just three simple purchase suggestions. So now when I run my own distro, I always ask people perusing it, "What bands do you like?" and then can riff off more obscure, amazing music by sound association. These recommendations generally come back to me a few shows later when that same person comes to the distro and says, "Good lord almighty Dave, thank you for the suggestion. Via Fondo is amazing." to which I respond, "Mhmmm. You're welcome, my friend." And that's my story.

But it doesn't end there, ohnono. Adam was in A QUIET NIGHT..., a very short-lived screamo band from Quebec which released single aforementioned 'Demo' tape out of 100 in 2005, which I also happened to pick up and still have with me today. It'd an interesting listen. It's a cool artifact. It's very special to me. 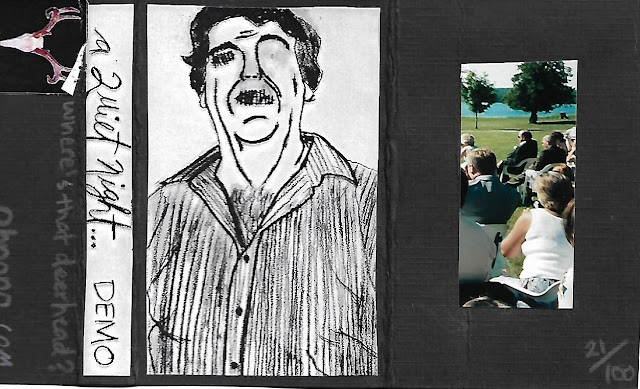 A QUIET NIGHT...'s only recordings begin with "imagine if rain came from a deer's eye", soaked first in lo-fi feedback, then a piercing scream, and then a whirlwind of chaos. The chaos is due to two factors, the first being the musical style, and the second being the muddled 'Demo' recording. I especially dig the slowdown after the first minute and twangy, out-of-tune guitar squealing with those shrikes over top. "training our skeletons to perform the acts we wish" has an Orchid meets mid-2000s Nebraska-screamo kind of feel and it's sick, but over too soon, just like the 33-second followup "these railroads lead to being found in the bushes". "branding the fire danceable" is much more emo sounding and raw as fuck. Adam's chaotic shrieking is the highlight for me but something about those weird guitars get me every time. Perhaps the most cohesive is "moans and cries at the gate indicate what?", which bounces off the walls for 1:36 (and is that a fucking breakdown at 36 seconds?!?!), making it one of the longer songs. The weird track titles continue on "searching is for vampires, not me" which is probably the most intense track on here, while "behind a wall of teeth, so dark and moist" is the most progressive and second longest, as the closer "cats and cannibalism" barely eclipses the two-minute mark of early Transistor Transistor-esque screamy rock/hardcore. 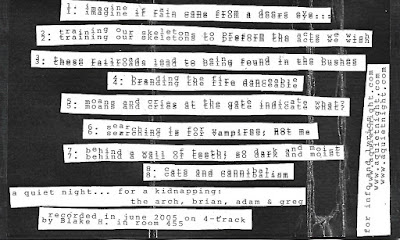 This isn't the greatest find of all time, and it's not even really all that great, but Adam plays a very important role in the shaping of my screamo musical tastes, as well as starting this blog and my label Zegema Beach Records. I don't know where you are Adam, but thank you. You shaped me more than you'll ever know. 💞

A QUIET NIGHT... out of print mp3 discography download