I consider PIPER MARU to be, first and foremost, an awesome, pissed off and raw hardcore punk band. Considering I know each of them individually, I also think of PIPER MARU as half of the band Terry Green playing with their extended family, as vocalist Andie generally does Terry's merch while drummer Dean is Terry's fill-in when sticks/hair extraordinaire Adam is unavailable for shows (cuz they're playing in Tower Of Silence too much 😆). From Terry Green you'll find Adam now on guitar while Terry's vocalist Adrian plays bass on this. To add to the confusion, Adrian and Dean also play in Huge Cosmic together. Don't expect PIPER MARU to sound anything like those bands, though. Think raw, gritty, punk rock and hardcore with a Black Flag meets Cerce kind of feel. 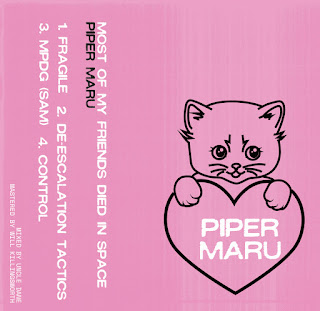 Holy hell, now that that is out of the way, I can quickly run through their initial offering, a debut cassette EP titled 'Most of My Friends Died in Space'. It opens with "Fragile", a finger-in-the-face to white privilege and the idea of reverse racism, doing so with rollicking and sassy punk rock and hardcore. "De-escalation Tactics" is much sludgier instrumentally, but no less blatant in its calling out of pigs (also known in some parts as cops) and demanding an end to their control and the racist system that enables and produces them. Andie's vocals, as well as lyrics, on this song are so good, as there is an awesome mixture of talked/shouted vocals alongside yelling/screaming. "MPDG (Sam)" is next and resembles the first track a bit, but seems more fluid and includes a lot of lyrics, including the  biting section, "I'm not your fucking mother. I'm not a fairy guide. I'm not the one to cure you, all those movies fucking lied." Closer "Control" opens with a very cool, swirling riff that explodes at 30 seconds and slides into a very catchy, circular and gripping loop that builds to a nice transition at 1:10 that leads back to a second verse. It is definitely my favourite of the four and is really fleshed out, making me think it may have been the last song written for this release but I have no fucking clue.

"After being in the music scene for years and watching so many bands and being so inspired, I’m ecstatic to finally be fronting one. I usually shy to doing merch, photography, and/or doors, which I still love doing, but it’s nice to be part of the action. I’m stoked that this gives me a platform to yell about everything I’m angry about, and stoked for all the other stuff I can yell about in the future. We stand by anti-oppressive politics and we want people to know that this is who we are and to not separate our music from our message.

Also I like to joke we’re an Exit Order worship band."
~Andie

PIPER MARU is playing the Not Dead Yet 2018 on October 12th at Owls Club. The doors are at 2pm and the show is all ages. You can find the facebook even page here. 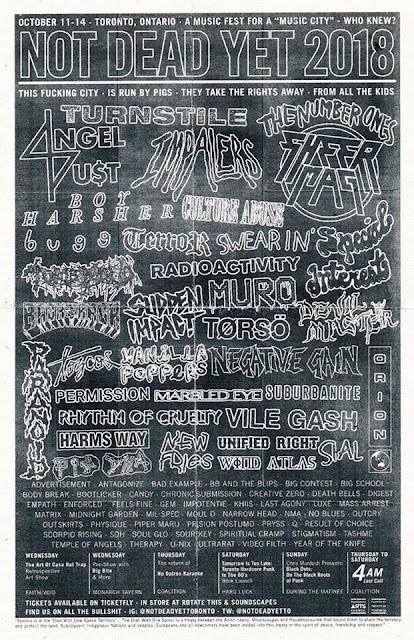