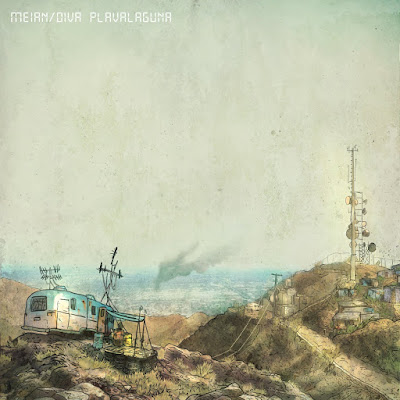 Yesterday Sophie's Floorboard premiered two tracks from the new DIVA PLAVALAGUNA and MEIAN split cassette coming out...today, actually, on Emocat Records. I highly recommend checking the songs out, but also the post as they give more details regarding the bands than I will, cuz that would just be redundant. I will say that DIVA is a very original, sassy, synthy, screamy three-piece band from Vancouver while MEIAN is a very prime cut of that fantastic Japanese screamo. The cassette releases today at the release show (linked here) and will soon have an accompanying Diva! Digital Desert Duchess comic. Very, very cool.

I will give you something new, though. My DIVA story. When I moved to British Columbia in January of 2018 I was instantly connected with Miggy and Henrietta through our love of screamo. They instantly became my best friends here and whilst living on the mainland, I made a two-hour round trip trek a few times per month in order to go see them and hang out. They told me they had just started a new band called DIVA PLAVALAGUNA (named after the singing, blue alien in The Fifth Element) and asked if I wanted to tag along to band practice. I did...three separate times in two months. So, I am quite familiar with the band as well as the other songs that have yet to appear online, but have been recorded. I am currently, frantically, searching for some practice videos I have of their songs but am coming up empty. Why? Because I was lucky enough to witness their first show, but the entire show, videos as well as podcast with Miggy were all lost in a shitty usb copy/paste transfer that left everything in purgatory. When I do stumble across the practice videos I will share at least one with you, but until then all I can find is a 23-second teaser that I uploaded back in February of this year.

The second of the two DIVA PLAVALAGUNA songs, "Infornography" is even more volatile and screamy than its predecessor. Delving heavily into influences such as The Blood Brothers, Soiled Doves, Senza and Arab On Radar, the band harnesses a ton of screaming from every member, the first minute is basically a sassy, raw, screamo fest. There's an ambient interlude just before the midsection that bleeds into the behemoth of a second half, led primarily by Miggy's biting guitar riffing and all that wonderful shrieking. "Diva Protocol" is much more synth and sass based, while this song is very chaotic and probably falls in line with more traditional screamo. The majority of their work falls on either end of this spectrum or somewhere in between, so there's a whole lot of different styles to love.


(2018) MEIAN - "Horizon" (from 'Diva Plavalaguna' split)
This thing hits right from the get-go, sounding akin to fellow Japanese screamo stalwarts Yarmulke, Envy and Sans Visage, which obviously gives me all the right feels. The almost Euro-sounding opening half is slow, groovy and ripe for head-bobbin'. There's a very subtle shift halfway through that brings more playful instrumentation into the fold, and with the very precise and jammy screamo I'm hearing I'm heavily reminded of Komusō and their new Slint-inspired 7", as the attention to detail in what seems like some basic sections are actually fantastically arranged. I'd never heard MEIAN before but you can bet your ass I'll be on the lookout for them in the future.