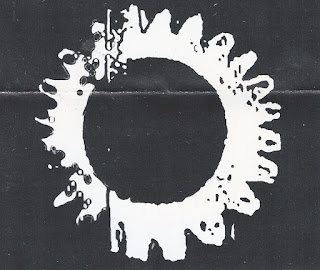 I only heard ARSEN a few years back, and delved heavily into the discography after picking up a 'Black Sunday' 7"EP from Lars at the 2017 Cry Me A River Fest in Germany. After moving to New Zealand, traveling around Australia and Hawaii, arriving back in Canada, and then getting my shipment of records from my pre-NZ I finally got my hands on the 7" again, nearly a year after getting it. I spun it around on the record player and after two songs I said to Lisa, "Yo, this sounds like Sabine." After another track I couldn't take it anymore and I nearly tore the jacket out of the plastic sleeve in an attempt to find out if my ears were playing tricks on me. Yep, it's Sabine. And Lars! Damn I didn't even know this was a pre-Aureole Of Ash and Resurrectionists band, but after jamming the entire discography it makes total sense.

The band didn't release much, as they had the debut 'Black Sunday' 7"EP in 2002 and their final recordings from the 2003 12"LP titled 'No Gods...Only Monsters' with a discography cassette being released back in 2006. The 7" is a great starting point, but after hearing the later material it is obvious that the production is lacking compared to the LP. The 90s Bremen and Canadian hardcore sound is apparent from the get-go, and mingles with the dual vocals to create a unique spin on the incredible power contained in the style. Opener "" is dark and deathly, reminding me of Battle Of Wolf 359 and Closet Witch. "Einsam, Wenn Man Die Warheit Weiss" sounds more like an old-school punk/hardcore song during its intro, but by the time the first minute concludes you'll need a new set of ears and likely a new soul cuz that's some heavy and evil sounding shit, especially the pause and subsequent destruction from about 1:52 onward. "Verdammte Scheisse" definitely has a Carol and One Eyed God Prophecy feel to it but crosses over into some later screamo from bands such as Welcome The Plague Year, Guidelines and The Assistant while closer "Die Kriegen Uns Night" is much of the same, albeit even blacker.

2003's 'No Gods...Only Monsters' is fucking amazing. I like the 7", but they really nailed on this release and it is more than apparent only a minute into opener "Stillstand", a very heavy, dual-screamed song that incorporates a lot of 90s hardcore but manages to really incorporate more screamo and emo-violence sounds that were coming out of Germany around that same time. There is a slowdown that Battle Of Wolf 359 must have used as a blueprint as well as a very progressive instrumental build that brings The Flying Worker to mind. Some other notable tracks include "Soziohierarchizid" (some Orchid worship and amazing back-and-forth vocals), "Rituale aka Machopisser Stirb!" (the swirling guitars and chugs are to die for), "No Gods...Only Monsters" (holy shit that's one behemoth guitar intro/instrumental track) and my personal favourite "Erde Meldet Sich Zuruck", which is has an apocalyptic, evil, emo-violence sound to it that will grip you for its 4:10 tenure.

I reached out to Sabine (vocals) about her time in ARSEN. Read the full interview below.


with:
Sabine of ARSEN


1 - How did Arsen begin?
Lars, Christoph and I met Marc on different shows while he was playing with Angstzustand. As we were hanging out at his place we spontaneously decided to do a band together since we felt very comfortable with each other and shared the same passion. Marc then introduced us to Arne at our first practice session together.

2 - Why the name, Arsen?
It was a compromise. Marc and Arne were into Arsen. I dont know exactly what the initial idea was behind it but Lars as a big godzilla fan wanted to add König Der Monster (King Of The Monster). So the full name was Arsen aka König Der Monster!

3 - How did your first recordings come about?
Due to the long distance between the parties involved we did not practice on a regular basis but intensely on weekends when we all were free. We would spend hours for two/three days in that dirty and smelly practice place – you can hear it had an influence on us :). I'm not sure anymore but we had the songs for the seven inch together in one or two weekends and since we were really into'em we decided to do a seven inch instead of a demo tape as it was planned before. We knew that guy from Bielefeld that had recorded bands we knew and liked a lot (Hybris, Cheerleaders Of The Apocalypse...) so we booked a session. In the end there were too many different opinions on how it should sound and the recordings reflect that sometimes we had heated discussions and needed to compromise in the end. I think no one involved was very happy with how it turned out.

4 - What can you tell us about the LP?
We were a lot more satisfied with the recordings for the LP – it was still was a compromise, especially between Lars and Arne whose opinions about the sound were pretty different. We recorded this analog with some lovely punks somewhere on the countryside who recorded the Zeroid ten inch shortly before, I think. For us it was a big effort, Arne and Marc even went to the Hamburg Habour one night to record sound samples for between the songs…

5 - Is it interesting to see blogs and people still discussing your band all these years later?
To be honest – I didn't really notice that people are still talking about Arsen … interesting.

Did Bremen hardcore influence your sound? What do you think about these new/old Carol recordings?
Obviously Bremen hardcore was an inspiration – later on Arne and Marc even moved to Bremen :) but even more influential were Canadian bands like Uranus and One Eyed God Prophecy or North Germany's Akephal. But we never set a direction – the songs were pretty much on a gut level which made em more intense and special to me.

We are pretty excited about those Carol recordings...damn its like time travel. Can't wait.

8 - What are you doing nowadays?
I am singing in Aureole Of Ash together with Lars and am about to join another band with lovely people called The Path. Itès kinda like the opposite of Aureole Of Ash – longer songs, more melodies... Lars is also still playing in Republic Of Dreams (yeah they still are a band!) and is looking to start a new project with some members of the now disbanded Saligia. Marc played or still plays in a punk band called Bombenalarm…and I don't really know what Arne and Marc are up to these days – we lost contact a long time ago. Christoph is a full time dad now and a hobby black metal guitarist with his band of Changing Unspeakable Names :)