I have recounted my BLUE YOUTH story more than once on this blog, so I'll just skip it. I will, however, let loose the news that we are making 50 tapes for the debut, self titled 'Blue Youth' EP that was digitally released in 2017. You can read me gushing about it here. Orders will go up in October/November for the five, sexy, powerful and addictive tunes, but you can nab the new 'Dead Forever' 12" from Zegema Beach right here (or here if you're in the U.S.) as well as from Santapogue Media, Suspended Soul Tapes And Records and Grind Central Records.

1) How was the band formed? 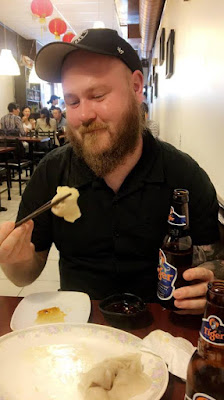 We’ve all played in bands with each other through the years. We all played in a short lived post-hardcore-gaze band called Good Girls, Gage and I still play in the sometimes active spazzy hardcore outfit Bermuda Love and Garret and I have been in probably 6 or 7 bands together in the last 14 years. Blue Youth started in 2016 with Gage wanting to get a noisy, groove-heavy three piece going with us, and the rest is history. There was no real direction we were going with in terms of sound, but given our backgrounds in punk/hardcore, the outcome could’ve been expected.

2) What does Blue Youth mean?
Great question! Haha. We had a very hard time coming up with a name for this project. We were in the mixing process of the EP before we decided on Blue Youth. Gage really wanted to name us French Exit, but I couldn’t stand the name. I came to the band with the idea of Blue Youth and it was the first one that we could all agree on. I think the name brings a connotation of frustration, sadness and anger people experience during their teenage years and early adulthood. Two-thirds of the band is pretty far past this stage of life, but I think the music speaks to those emotions and feelings, and Gage writes the lyrics, so we’ve got the “youthful” aspect covered. The more we write and progress as a band, I feel we have come to identify more strongly with the name.

3) What was the first song you ever wrote?
The first song we ever jammed on as a band was what turned out to be “The Power”. That being said, when we started we put an emphasis on writing in the moment and not overthinking things. We would have an initial idea that we would jam, try to build a structure, crudely record it on my iPhone, and then leave it. The next time we would get together we would try the process again with a new idea, and so on. We would touch on the songs, refine small parts and transitions, but that's essentially how the EP was written. So “The Power” was the first one to be played, but they were all written in just over a month.

4) How would you describe your progression from the EP to the LP?
Musically, we had more time to flesh out song ideas. We started working on “(The Worst Of It Is) You” in June and finally finished it before we started recording the album in September. “Succubus” was an instrumental song that we would play at shows, but was never really finished til Gage laid down vocals for the record. We gave ourselves more time to let songs marinate and take on a life of their own before we put them down on record. I think we were also focused on making this record heavier than the last. We recorded drums in a big room in one of our local venues, I used about 3 heads and two cabinets for bass, and Gage acquired a plethora of game-changing pedals and used a huge rig to get his guitar to sound the way it did on the record.

Chris Dimas (our engineer/unofficial 4th member of the band) did a fantastic job of bringing this record to life. He put a ridiculous amount of time into making us happy, since, as a band, we all like different things. He did a wonderful thing, and this record wouldn’t be half as good if it wasn’t for his work on it. Y’all should check out some more of his work at Grind Central Records!

The LP... that’s a tough one... “Succubus”. There’s some grooves in that song that get me hyped when I play it live or ever listen to it. That said, I think “(The Worst Of It Is) You” is the best song to play live. There’s a lot of dynamics and a few changes that keeps the audience engaged.

6) Have you guys toured much? Do you plan to in the coming year?
Unfortunately, we have not. We try to make the shows that we do play out of town count as much as possible. Between work schedules, family commitments and Gage’s prior engagements to his other band (Surf Dads), we find ourselves in a tough touring situation. I mean, we’ve only played about a dozen shows total with this band inside and out of Regina, so I think something might be coming in the next year or so, but we’ll probably have a new album by then, knowing us.

7) Did you scout any labels at the beginning of the band's recordings, or was the idea to go DIY/Grind Central all the way?
Grind Central is Gage and Chris Dimas’s baby, so us and Surf Dads were their first releases on the label. I really like the family-like feeling of being a part of it. There’s a lot of great young bands in Regina right now, so it’s an exciting time to be putting out music. Also, we weren’t really noteworthy outside of our home province, so selling the band to other labels, especially not having done any touring, was kind of a tough thing.

8) At this point in time too many bands are doing vinyl. Like...every band, almost. And their mums. Demo recordings, not very good recordings, cripes even live recordings. So why was it that I had to convince you to do vinyl? It seems a rather humble trait I see rarely.
Vinyl was always our original goal with this record. Financial constraints were really the only reason that we strayed away from it. We had come to terms with the fact that we would have to settle for a cassette release, until I reached out to you in March. The order was put in that prior week for the tapes and I think we were just itching to put it out, as we had been working on it since September 2017. I think that maybe our only hesitation stemmed from it seeming too good to be true. It’s very humbling for people to rally behind something that you've put a lot of time and thought into, and especially from individuals who you’ve never met. So that said, a very sincere thank you to David, Brandon (Santapogue Media) and Brett (Suspended Souls) for helping us put out 'Dead Forever' in the medium that we feel it should be played on!

9) Is it weird being on what I would consider a screamo label?
Not really? I definitely think that exposure to new audiences is always a good thing. In my experience, music lovers have a wide enough range of tastes that can extend to other genres, and we’re a loud, shouty band, so there’s some crossover there. It’s also nice to be a part of a label that is personally invested in the band, so no, I don’t think it’s weird. Haha


10) What are your favourite records of 2018?
I can’t speak for the other guys, but I definitely have a few front runners.

Make sure to check out IDLES. I got to see them live last night and it was a very special experience. Cheers to great music!
Posted by Dave Norman at 06:50