I first heard about MARCOVALDO in late 2017 when, yet again, a trade Dingleberry Tapes And Records yielded another excellent, new band that I had heard nothing about prior. Or since, for that matter. So if you are into bands like La Quiete and Raein as well as the current resurgence in Italian-sounding screamo from the likes of Rutka Laskier, Chivàla, Øjne, Pastel, Trachimbrod, Shizune, Ogni Giorno and ByMySide you'd be mad not to take a quick gander, at the very least.

Their first available release (at least at this point) is the self titled 'Marcovaldo' released in 2014, a full five years after their inception? We must be missing some recordings here. Anyhoos, opener "Viale Berna" is a simplistic, clean guitar instrumental intro that preps us for "Una biglia, Cesena", a multi-vocal song that sandwiches a bit of hectic between the lulling beginning and end. "Saturno5" plays it cool for the first half before laying on some heat in the final thirty seconds, not totally unlike "Empire! Empire! (i was a lonely inverno)", which opens over rainfall and builds like a light storm protecting its rainbow offspring. "I giorni ruvidi vetri" has a swing to it right from the get-go that brings to mind the Italian greats for the first time on this debut EP and is over much too quickly. Closer "L'ultima" is just 46 seconds of a single guitar strumming to a climax with very little variation, making this more of a four song EP as opposed to six - but then again I'm not the biggest instrumental guy unless it's got some fire under it. 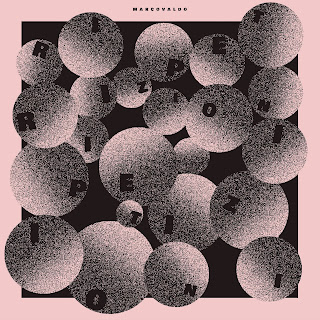 The tape I received in my trade was the 2017 EP 'Ripetizioni', and it's much more in line with my tastes than their self titled. The first track titled "Asole" even has some singing at the end, but is a great take on melodic, chill, Italian screamo. "Chevalier" is very late-era La Quiete, utilizing very twinkly and light instrumentals over spoken word/yelling while "Terza media" is ashort instrumental
track. "Semicerchi" has a very Ogni Giorno and Shizune feel, with more emphasis on the noodly and twinkly guitars that you'd find on a Suis La Lune or Trachimbrod record. "Settebello" is slow, ambient and beautiful, featuring softly spoken/sung vocals over distant, subtle and dreamy instrumentals. "'La vita è sopravvivenza delle cose, apprezzamento della natura, consolidamento dell'amicizia e​.​.​.​'" has a lot of Shizune and Raein going on, being very epic in nature and a fantastic finish to this remarkably unnoticed EP.

I'm not sure what the band has planned next, but I'll be on the lookout for sure.