Genres: Punk / Rock / Math Rock / Noise Rock / Experimental
Related artists: Hey Predator, Big Knife Little Knife and Gary's House.
Country: Montréal, Québec CANADA
Years Active: 2011-present
Song: "Crimean Crimes"
Album: "Outside Language"
Year: 2012
For fans of: Campbell Trio, Stop It!!, Hercules Hercules, North Of America, Maps And Atlases, Ahleuchatistas, Q And Not U, Native, At The Drive In, The Paper Chase, (early) Lucertulus, And You Will Know Us By The Trail Of Dead, The Mark Inside, Hot Hot Heat, For The Mathematics, Tokyo Police Club, Life In Vacuum, The Smiths, Joy Division and No Knife.

Earlier this year I did a podcast with my friend Miggy at their place in Vancouver...and it was all lost in a shit USB transfer. It was a good podcast, but in it Miggy blew my mind more than any other co-host, and floored with "Crimean Crimes" by our local GIRL ARM. I remember thinking halfway through that I was listening to a mixture of Cursive and The Paper Chase but then the song picked up and got hella dancey, yelly, kinda North Of America meets At The Drive In, and it just plain blew my socks off. It's six months later and I'm still smitten, fer science's sake. 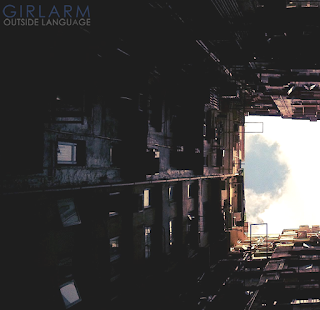 Okay so the ultimate GIRL ARM experience is had with their debut, 8-track album titled 'Outside Language'. Opener "Jetsons" gets things started jarring, awkward and dancey, all things North Of America. Even the tradeoff vocals are that drunken, warbling indie rock yell that the East Coasters were known for, this time gettin' busted out in Montréal. "Year of the Walrus" is even more disjointed and angular, while the very short noise interlude "Molto Erotico" follows. And that brings us to, hoooooly fuck, "Crimean Crimes" aka one of the best songs I've heard in a very, very long time. Obvious comparisons can be made again to North Of America, Campbell Trio, At The Drive In, early Stop It!!, Q And Not U, Native and Hercules Hercules, but the first 1:56 is a quirky, instrumental intro that leads to a complete stop before the song snags you by the jugular. They start by injecting a potent guitar lead directly into the call and response vocals that are yelled back and forth as the song swings around in fantastically sassy and confident math-rock. As this section closes the guitar slowly leads the rest of the band into a slow-but-major groove that is littered with spoken/yelled vocals (very At The Drive In) before reverting back to angular, danceable punk. Are we done here? Fuck no, cuz at 3:36 the vocals and drums count in a snazzy start/stop, or dare I say breakdown? I dunno, it's awesome, just like this entire track. "Disappears" is quite playful and more melodic than most of their work and is the precursor to another sick jam titled, funnily enough, "Jacques Tits". This thing is catchy as fuck, jazzy and boasts one of a time change transition, first at 1:50 and then to its epic math-rock climax at 2:09. "Elephants" is a cool, mathy, jarring, indie rock tune that is another banger while closer "Health and Safety" has some Life In Vacuum vibes before the noise outro. Jesus I love this record.

After their 2012 debut I find I can't get into their sound nearly as much. They calmed down a lot on the mathy guitars and back and forth yellin', as this record is more on the weird side. 'Trading Cities' opens with the blown out and abrasive "Her Hands", a very chaotic and loud take on noise-rock. Sandwiched in the middle is the title track "Trading Cities" which sounds like the bridge connecting this EP to the first LP, although the guitars definitely take on some weirder styles and tones, giving it a drugged out Tokyo Police Club and The Mark Inside feel. Closer "Bad Tax Advice" is the bridge from this transition-era to their upcoming 2018 LP, so it's much more rock-oriented and more straightforward in structure and light on the ears.

In 2015 they released 'Spoilers', a two-track EP. The first is titled "Eleanor Bigsby" and is a bit of a mindfuck, weaving in and out of different parts, genres, rhythms and vocal stylings, the best of which take place from about 1:00 to 1:30. The other song here is "The Soft Rich", a beep-boop driven song that opens like a group of computers making music. Things coagulate by the 40-second mark the song starts to figure itself out after the first minute.

I just listened to the first two tracks from 2018's LP 'Cell Death', as they are the only songs available to listen to. Both are much more stripped down and basic. Gone are the manic vocals, writhing rhythm section and mathy structures, and in their place are 80s goth influence, monotonous singing and a raw, punk sound not unlike Joy Division. Apparently 'Cell Death' was to be released on June 15th but bandcamp still has just the two songs (as of September 18th, at least). After speaking with the band I was informed that they have a release show at Casa del Popolo with Joint Custody and Chiffres on October 11th, 2018.

So yeah, jam 'Outside Language' if you dare, cuz you may not be able to stop.