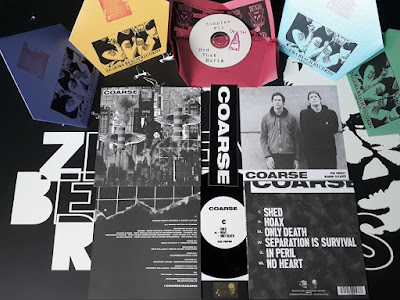 So the story goes like this. One day I frequented a forum in which my friend Tarquin from South Africa posts. That day he had shared a new band called COARSE whilst namedropping Botch, The Chariot and Norma Jean in the for fans of section. So let's get one thing straight, if I see "sounds like Botch" I have to, just have to, at least check it out. Needless to say, I checked it out and was blown to smithereens. Noticing that the band didn't have a download nor a facebook page I sent them an email via bandcamp, asking if they wanted help releasing the six-song EP. I received an email back a few days later from drummer/vocalist Brandon. He told me that they had posted it on bandcamp as a stream-only to see what interest there was, and it was then promptly pulled. Thank you, Tarquin. Thank you so much. If Tarquin hadn't posted that initial link I wouldn't have had the chance to help this two-piece release such a phenomenally cohesive and simultaneously chaotic and mathy piece of work. Let's run through them six before I go off on more tangents.

So 'I' houses three tracks per side. On the A-side things start out with the sensational single "Shed" for which they also created a music video and released it prior to the July 27th release date. It does an excellent job of giving the listener a false sense of quiet and melody before the two members lay absolute waste to the listener. Guitarist Ryan lays out the higher pitched screams while drummer Brandon layers over some deep growls now and again, giving every song extra flavour and a hell of a lotta extra kick. The speedup at 1:12, slowdown and subsequent, prodigious breakdown close out the song. And what a song!

In my most recent email exchange with the band, Brandon informed me that "Hoax" is next up in line for a music video. Now, that information got me breathing heavily because this is probably my favourite COARSE track. It opens more Botchy than anything else on the 7", with a rip-roaring, off-timed, mathy, circular section that screams "Saint Matthews Returns to the Womb" (in the best possible way, of coarse 😆). It runs around like this, amazingly, for the first 32 seconds before shifting into more traditional, chaotic hardcore. There's a sick breakdown halfway and again three-quarters through and that ridiculous opening section is tacked on to the end

"Only Death" is probably the most progressive and least heavy song on the EP. That being said, don't expect acoustic guitars and singing. There's something incredible about Ryan's vocal delivery beginning at 43 seconds, as he kind of whine/yells the lyrics and stretches them out, increasing volume and intensity as they swirl around the listener. I don't know why but this song took me longer to love than the rest but now it's one of my faves.

The EP's only instrumental track is the noise interlude "Separation is Survival" with some subtle, distant screaming (not unlike Kill Sadie's "Untitled Number 304") was also made into a teaser music video. This short, 43 seconds is the equivalent of drowning in a barrage of excessive corporate marketing campaigns and is as numbing as it is jarring.

Perhaps the heaviest song on here is "In Peril", primarily because Brandon handles more than half of the vocals and his deep, gutteral growl is deathly in delivery. The takes a slight breather at 30 seconds, but otherwise this is utter annihilation as those pummeling drums, shrieking guitars and vocal call-and-response are littered everywhere else.

Closer "No Heart" is another fantastic tune and excellent closing track. The guitar opens like a mental disease, only to mix with the drums and vocals at 30 seconds in a complete and utter psychological breakdown. After likely perceiving the beating to be finished, COARSE abruptly hits ludicrous speed and shreds the nearly unconscious listener to a fine powder, especially with the final 25 seconds.

We made 300 copies, with an overrun of 21 that will have alternate covers and an alternate/sparkle sticker. I will post them for order alongside the COARSE interview in October. The other 300 come with the standard jackets, two-sided inserts, a giant sticker and a download code. Order one from Zegema Beach Records via the Canadian/International store here or the U.S. store here.

Lastly, as briefly mentioned above, be on the lookout in October for a COARSE interview as well as the online ordering for the 7"s with rare/alternate covers.