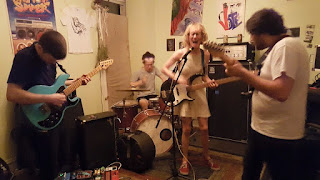 STALE played and fucking were screamo in the absolute sense of the word. Lo-fi recording full of passion and Funeral Diner/Logs-esque screamy hardcore with a single song demo release. You can't get any more screamo than that.

Time for a quick history. The project began and ended in 2015 knowing full well that a member was going off to college four months after their inception. The four friends wrote an EP and played a single show, although unfortunately only one song exists in full. Why? Well, apparently Nick and June (also in Synodus Horrenda) kept getting too drunk when sitting down to record their vocals. After putting it off for five months the laptop died and the songs were lost. Luckily they managed to finish one of the songs before this and had sent it through dropbox, thereby enabling them to retrieve it and post it.

"Abaddon" is, simply put, an awesome screamo song. Imagine Hot Cross and Adaje style riffage carried on the backs of bands like People's Temple Project and Tunes For Bears To Dance To, although Nick just told me that they were listening to Indian Summer and Plunger on repeat, so take those comparisons with a grain of salt. It's 3:18 in length with a lull in the latter part of the midsection and bookended by dual screaming and those very playful, noodley and catchy fuckin' guitars.

Someone go back in time and save that goddamned computer.