NEVER BETTER released a self-titled, 4-song cassette EP last year on Middle Man Records, mixing members from different parts of North America and creating one hell of a record rooted in screamy, metallic hardcore. This is also pretty much a supergroup, with members spending time in such notable acts as You And I, The Assistant, Coma Regalia and La Luna. They lyrics are very personal in nature, dealing with issues such as body dysmorphia, loneliness and dreaming. 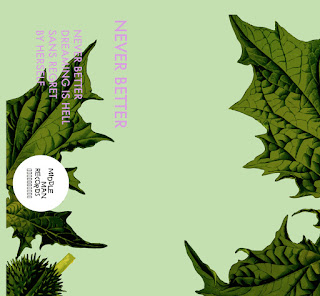 The EP opens with a self titled track "Never Better", which sets the stage as a cathartic release through very metal influenced hardcore that borders on screamo. Right off the bat bands such as Carol, To Dream Of Autumn and Converge, especially with the metal edge to it and Vanessa's absolutely throat-shredding vocals. "Dreaming is Hell" follows with a deceptive intro that explodes 10 seconds in with unparalleled force, venomous riffs and more vicious screaming. Next is "Sans Regret", a much more diverse track that begins with subtle instrumentals and spoken word before it delves into the hardcore. Right before the minute mark the band shifts hard into screamo territory, bringing to mind the members' other bands, most notably What Of Us, Coma Regalia and La Luna. Closing the tape release is "By Herself", opening with some sick basslines before submerging the listener in abrasive, deep and dark hardcore that dips in and out of more spoken word (which I'm a sucker for).

Not only does the release kick serious butt, but I must say that the tapes look beautiful (in particular the purple and green), so I grabbed some for the ZBR distro (linked here) but if outside Canada you should nab them from Shawn in the U.S. at Middle Man (linked here). I have been told that the band has shifted into a new lineup and is changing names, so I guess technically NEVER BETTER was only with us for a year.