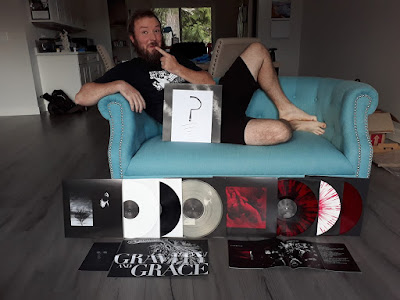 Song: "Virtue"
Year: 2018
For fans of: Suffocate For Fuck Sake, Godspeed, You! Black Emperor, Vi Som Alskade Varandra Sa Mycket, Locktender, City Of Caterpillar, Envy, Broken Social Scene and Love/Lust.
This post's artist is from the June 2018 Mix. This is track #13.
You can download: the July 2018 Mix#7 right here or get the new August 2018 Mix#8 here.

When you hear a song like "Bound" open up an album you may have genre experts picking apart the elements; deciphering the post rock, black metal, screamo, etc. elements. But put that approach to the side for a second. Close your eyes and let the sounds conjour an image for you in your mind's eye. As I listen to "Bound" what I'm seeing right now is aggression that is well controlled, filtered through a clean, melodic net. There's a natural self reflective feeling that pours out of this music for me and upon reviewing the lyrics it seems we're getting a good dose of that in both music and words. The canvas only gets more depth by the addition of the horns and strings. By the end of "Bound" you may have figured out that these folks have honed their skills in creating beautiful textures with the way the composition makes room for all the instrumentation.

"Haunt" follows things up with a darker, more tortured approach right out of the gate. The way the vocals crawl along with drums to the backdrop of speed picking guitars creates a really nice contrast between fast/slow movement. You're given a moment's breath to break the tension before the band takes you on an all out blast beat vacation. The song comes to a close amongst a a steady tide of rolling drums and strummed chords.

When "Shiver" begins with it's double bass drum work and reverb friendly guitar I'm taken out of my head space and back to reality. This is the point where I go back to genre analysis and recognize a very melodic black metal sensibility. Eventually the song cools off into an instrumental piece that would fit right in on the soundtrack to movies like "Suspiria" or "Hereditary". When the song crashes back in and combines elements of the instrumental piece with an all out blast beat aggression it creates something pretty beautiful to behold. On this note, the song exits.

"Bloom" is presented as an instrumental piece, though it doesn't feel incomplete in any sense. Respire do such a good job of interlacing their vocals as another instrument in the cannon, that a piece like this can stand on its own with no problem. The horns do the talking on this one, taking the front-and-center melody while the drums and strings work the dynamics in an impressive way.

"Catacombs" starts with some very matter of fact screaming and straight forward drumming. It's a more direct approach for the band and the genius here is watching them craft it into something larger by adding more layers of instruments and vocals as the song steers forward. The break has the strings taking center stage, setting up the guiding melody before the whirlwind of drums and guitars pummel over top. It's a massive dose of chaos that comes back together in half time start/stop guitar movements. To seal the deal on this one the band throws some sludgy, filthy chords at you, relentless in their delivery.

The gentle and floating opening chords of "Virtue" are soothing and even more impressive when layered with horns over top. Respire's go-to is written up in parts like this; having one of the instruments establish a main melody, developing it, and then without warning bringing in an intense orchestra of blast beats and speed picking single note guitars. Another thing the band has seemed to have perfected by this sixth track is how to break the tension with beautiful interludes. We get one of those on "Virtue" that builds quite naturally to a textured mid tempo ride, overlaced with some anguished vocals. They once again employ the start/stop guitar movements that build the intensity before anchoring back down.

"A Heart Still Pines" strikes me as a song that had a purpose from the get-go. It doesn't hesitate and gets right to the point both musically and lyrically. I feel like it's saying "listen up" right out of the gate. The repetitive nature of the words along with the driving music really just nail home the urgency. We see ourselves out of this one with some really nice horns taking center stage.

The record closes out with "Denouement", a song that begins with a singing horn, communicated a soothing tone as if it's looking back on the 7 songs before it and commenting on all that's been achieved.

Watch my interview with Respire and Love/Lust

buy the complete RESPIRE vinyl discography (only one available)