BLUE YOUTH. Goddamn. Why are you so good? Maybe I should backtrack a bit.

In the early to mid 2000s I was a Level Plane Records nut. Like, I bought almost everything that came out on that label. Therefore, I most definitely got hard into North Of America and The Holy Shroud, which were two phenomenal, Canadian, math-rock, noise rock and post hardcore all mixed together. Shortly after I discovered Riddle Of Steel, a much more melodic and clean band but not all that far from the previous two I mentioned. Then nothing happened for what seemed like an eternity (for the most part anyway; Dream Caste came out in 2013/2014 and I got pretty stoked but then the band ended). I was waiting for something in that sassy, indie, noise-rock vein and nothing really hit home.

And then, in late 2017 my friend Chris Morris (who helps run Dead Air At The Pulpit) posted this review and cited in his post in the forum that it was for fans of North Of America. Naturally I got very excited and jammed the self titled 'Blue Youth' EP. I was fucking floored. Seriously, even almost a year later I jam this a couple of times a week. It starts with a fucking phenomenal track called "The Power", in which the band pulls out some fantastic singing, screaming and "woo ooo" backups during the chorus. The songs ends with the chorus unraveling as the vocals morph from singing to shrieking. Seriously this is some sick shit right here, taking sassy noise-rock to a new level, and it's the first track off their demo, essentially. Following this gem is "The Screw", the lengthiest BLUE YOUTH song recorded to date, and it's only 4:17. It opens strong and throws in some fantastically driving guitar 25 seconds in and again at a minute. This transitions with screaming and crooning to the hefty, instrumental midsection that is so Riddle Of Steel it's bananas, as the bass and drums drive the song forward, mingling with distant and wavering guitars. The song eventually comes full circle back to the chorus at 4:04 to drive the song home. And what a song! One with which they close with live sometimes, I've been told. "The Enemy" is next, beginning with quirky guitar effects and some dancey ass bass but by 45 seconds we've got Gage screaming "I am not the enemy. Please set me free!". This song in particular I find reminiscent of The Mark Inside and Life In Vacuum. "The Past" is another banger that rides a powerful instrumental wave using perfectly balanced and catchy-ass vocals from guitarist Gage McGuire. The vocals dip at 50 seconds while the guitars replace it with squealing and once the minute mark is cracked that sugary sweet chorus kicks in to put you in a dance trance. Wrapping up this debut EP is "The End", the shortest song here at 2:42 and the most diverse of the five, focusing on discordant riffs, angular rhythms and screaming. Zegema Beach will be making 50 copies of the tape this winter for a late 2018 release. 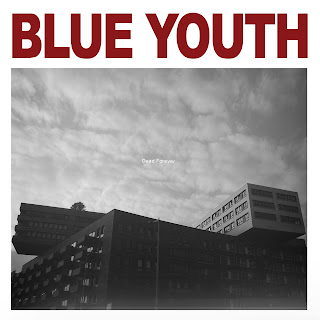 I contacted the band after hearing the EP and asked if I could help release their next endeavor, to which the band said they'd get back to me. The 'Blue Youth' release ended up in my top five EPs of 2017 (linked here) and I was left salivating until the early months of 2018 when I was sent the new album by bassist Jon, on whom I've since developed an internet crush. I listened to it once, and I really liked it. I asked if they were doing physicals, he said yes, some tapes. I listened to it again. I liked it even more. Then I listened again, and again, and again...and now it's been almost four months and I don't go a day without hearing at least one song from 'Dead Forever'. I became so obsessed with it so quickly that I basically demanded that the band do 12" vinyl, so I used my label Zegema Beach Records to scour North America for two great labels (Santapogue Media and Suspended Soul) willing to help invest in 200 copies so we could release this sensational work of art properly. Currently the 12" is up for pre-order at ZBR (linked here) but the 12"s are complete and shipping from the plant to me tomorrow for an early August release.

Oh yeah...the songs. Here goes. Side A of 'Dead Forever' is fantastic. It opens with perhaps the penultimate BLUE YOUTH track "Black Lung". Melting the exact right proportions of pop sensibilities whilst keeping things powerful, driving and at times screamy, imagine if Drive Like Jehu and Q And Not U had a baby that resembled METZ and Life In Vacuum and you've got the right idea. Up next is the very polarizing "Delusional//Unapologetic" that sounds like two songs mashed together in the middle. It opens with a steady, driving bass riff which collides with the rest of the instrumentals led by some utterly ridiculous vocals at 23 seconds. The listener then hurtles through the noise-rock space-time continuum (goddamn that's a mouthful) until 47 seconds when the song turns an abrupt corner and takes the punk route for a brief moment before returning to their previous post-hardcore/noise-rock sections. The song shifts gears again at 1:23, incorporating my favourite vocal pattern with the lyrics, "Give this life one last resuscitation. Free my world from this incarceration. Give this love another shot of adaptation. Give this love another shot of amalgamation." Jesus fucking Christ that might be the best part on the entire record. At 1:48 the song downshifts to bass and bare instrumentals with repeated mumbling and eventual chanting of, "I'm unapologetic and may seem a little pathetic, but I'm not afraid to say that I want you. It may come as a surprise when I see the look in your eyes and it's unfortunate that they are so telling." As track two fades out and track three starts up we are whisked into the deep, haunting, cavernous tunnels of the instrumental interlude "Water Well". Last up on the A side is another abrasive and aggressive noise-rock song called "So Seizure". This track utilizes a rapid-fire and repetitive chorus of, "So so so so so seizure (da na na na nah!)" to hook the listener with its harpoon and reel us in only to care and nurture us with an incredible straddling of heavy rock and punk/hardcore. Oh, and again, the way Gage lands those vocals at 26 seconds and again at 60 is uncanny and gives me a very warm, tingly feeling. At 1:31 the song seems to exhaust itself, only to swing around 180 and lay a catchy-as-fuck close from 1:54 to 3:15, complete with an unbridled, Live In Vacuum-esque guitar solo and a bunch o' yellin'. My good lord, what a phenomenal first half.

And then Side B hits...and you'll be like..."Coheed?", as "(The Worst Of It Is) You" opens with piano tinkling that's incredibly similar to the aforementioned band. It's very pretty but dark and leads nicely into perhaps the most complete song from a rating perspective. The band lays right into it instrumentally, going for some rock riffs that could shake a stadium from 40 seconds to 1:09 before settling into a rolicking good groove that slides beautifully into an eerie guitar progression that loops back to the groovin' part. After this second verse the songs shifts into its only vocal chorus that will get stuck in your head for months, in my case at least. There's also a sassy close with more stuff that reminds me of the almighty Life In Vacuum, and I've never said that about any other band so that's something. That gorgeous song is followed by "Pause For Death", another interlude of sorts, with a bit more from the band including some weird vocals and reversed recordings. After the mist clears, "Succubus" goes right for the jugular as the band's heaviest, shortest and perhaps hardest-hitting track. At 2:24 it boasts a righteous guitar riff that reminds me of Akimbo, with vocals that aren't too far behind, just sassier and at times higher in scream department. The midsection slowdown that begins at 40 seconds is superb, as the members build off of each other and eventually the fuse burns down to the dynamite and everything detonates at 1:17. Does that sound like Helmet? Fuck I dunno but that shit is most definitely the bomb. The finale of this so so so so good record is the title track "Dead Forever". If there was to be a single to break them into a more mainstream audience it'd be this little ditty. It's 3:01 in length and somehow manages to juxtapose, transition through and mix a myriad of styles, influences and sounds. It opens with a minor drum solo before everything swirls around the listener in a flurry. As the intro settles, the song floats around like dispersing fireflies amidst awkward, intermittent and feedback soaked guitars before the vocals repeat "This is the sound of doubt in your head!" and those rolling drums crash into the intro riff which is also the chorus, bringing to mind METZ, No Knife and Death From Above 1979. I expected a lot from this album, but I didn't expect it to most likely top my album of the year list this 2018.

Holy shit that's a lot of words for 13 songs. But when they're this good I've gotta do what I do...gush excessively. To recap, BLUE YOUTH is fucking amazing and without a doubt my favourite active band. I don't see this getting unseated as my album of the year. You can order 12" now from Zegema Beach (linked here) which, coincidentally enough, I was contacted about this afternoon as beinig complete and will be shipping to me tomorrow, so they'll be shipping out in early August!!! So pumped. The 'Blue Youth' cassette EP will be coming winter 2018 on Zegema Beach. Oh, and if you can see them live I'll be jealous of you forever.