ACME were an incredibly important Bremen band that released a compilation cd/12" posthumously in 1996 following a tape (1993) and 7" (1994) after being a band from 1991-1995. As someone who heard all of the bands they influenced before hearing them, I would describe their sound as one of a much rawer and darker Converge with more metallic hardcore and some subtle screamo nuances. The members went on to form other notable and highly influential bands such as Systral, Mörser and Carol, with their sound being the foundation for Bremen hardcore, considering the timestamp. This band also falls in line both sound-wise and historically with Canadian bands Union Of Uranus, One Eyed God Prophecy and Drift. 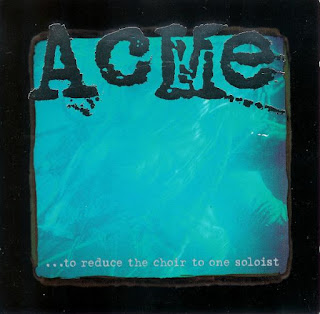 Seriously, these songs are vicious, hard-hitting and unrelenting. "Blind" begins like an unwanted war trench advance and shifts into utter ridiculousness just 20 seconds in. Seriously you can't hit much harder than this, especially when they slow it down a tad and incorporate very subtle stops to make the riff a breakdown. The song continues to pound the listener into submission, with the drums doing a large part of the damage...especially the kick pedal. An inclusion of a completely unnecessary but fucking awesome stop is devilishly embedded at about 1:45 and is the highlight of the song for me, expect maybe those towering verses. "Attempt" isn't too different from the first, but definitely fires on all cylinders right away and tends to wade through slower, sludgier riffs amidst the absolute destruction. "Ordinary" begins with a short, sinister riff before reverting into typical (aka amazing) ACME metallic hardcore. It culminates just after 1:30 with multiple destroyed vocals and a prodigious wall of crunchy, epic instruments. Another track I always take note of is "Repress", a sheer ripper of a song that lays down some apocalyptic vocal work and very early Converge-esque moments.

The band has also kept a more than decent continued history through their facebook page, which I'd recommend following as things are still being unearthed and posted.

(download '...To Reduce the Choir to One Soloist' here)