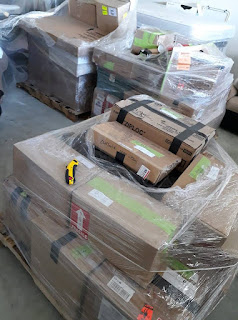 The massive amalgamation at Zegema Beach Records has begun. I generally spend between one and four hours a day sorting through stuff and will likely be finished in late August. So this is what that means for the ZBR stores:
- http://www.zegemabeachrecords.com will continue to be active as a website but the store will be frozen while I update all the new/old/unposted stock from June 15th to August 31st, with a full relaunch on September 1st, 2018 as the Canadian ZBR store
- http://zegemabeachrecords.storenvy.com has been the primary store since the beginning of this year and will be so until September 1st, 2018 when it will become the United States ZBR store

During these months I will be doing four themed posts as "Holy Shit, Look What I Found" #s 1-4. I've already uncovered some extremely rare and long out of print ZBR releases so I will be posting them on the Zegema Beach Records websites for you to pick up if you feel so inclined. There will be a few that I expect to move within 24 hours because I know people that have been searching for a year for these. 😁

The Zampler #11 was released on July 1st as free/donation/streaming digitally, with physical cdrs coming in late July. It is titled 'Death From Above' and features the new Envy cover by Shizune that will be on the Envy tribute compilation releasing late 2018 on Zegema Beach Records. Get that track and 29 others on the zampler by clicking here.

In terms of ZBR releases, we are shipping literally every release right now excluding the Respire records as they have not arrived yet. So this includes: Sans Visage, Komusō, Snag/Swallows Nest, Euth, Rutka Laskier, Crowning/Swallows Nest, Coma Regalia, The Ultimate Screamo Band and Desolate Hands Move The Hour 4-way. Pre-orders are now up for both the Blue Youth 12"LP 'Dead Forever' and Coarse self titled 7". They're all up in the ZBR storenvy shop linked here.

You might have noticed this new ad. This is literally the company I work for. I work from home. Sometimes I get paid to sit on my computer and not teach. When I get paid to teach I make more than $20US/hr. If you have teaching experience and are interested feel free to hit me up with any questions or just clickthru the link and see if it's for you. They try to get you teaching in a week if you pass the two interviews.

And lastly, here's the tracklisting for OMSB mix#6 that was reviewed in June:

9) being reviewed in July

10) being reviewed in July

11) being reviewed in July

The new OMSB mp3 Mix #8 includes 10 tracks that will be reviewed by that Dave guy, including:
*-* that awesome screamy rock/hardcore/experimental band from RVA circa mid-late 2000s
*-* the Canadian band that did the Bremen hardcore thing...or did Bremen do the Canadian thing?
*-* members of The Reptilian, Shoto and Locktender form new band
*-* yet another Richmond, Virginia band that you should be shitting your pants over
*-* that new Philly band that everyone's talkin' bout

Any bands/labels that are interested in having their stuff reviewed, please email zegemabeachrecords@gmail.com: with "Open Mind Saturated Brain" as the subject. Please keep in mind that I don't review everything, just what jives with the blog. I will, however, listen to everything you send me. I would recommend emailing with an idea for a song/album premiere 2 months prior to that song/album release date for a much stronger chance at being reviewed on this blog. Bands that have already had their discography reviewed can also submit new albums for review if they include song/album premieres.
Posted by Dave Norman at 07:00