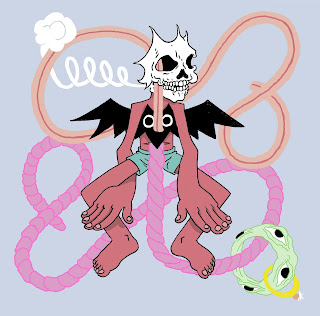 I pretty much think of three things instantly and simultaneously when I hear CHALMERS. First and foremost, this is pretty sweet. Second, it kinda sounds like Off Minor. Third, this obviously has ex-members of We Were Skeletons. If either of the second two whet your appetite I think you'll dig this pretty hard. As the band is still active, the most recent endeavor even has some Birthday Boyz moments, a comparison I don't throw around lightly.

Their songs are quite intricate, juxtaposing chaos and melody with a primary and secondary yeller/screamer. I love the methodical grooves present in every song, usually many, all strung together with excellent craftsmanship. CHALMERS began when We Were Skeletons disbanded in 2013 and quickly released 'Four Songs' and 'four (twenty) songs'. I consider the former a proper release, housing four songs all about four to five minutes in length, while the latter is just the same instrumental "jam" four times in a row. On 'Four Songs' the design and approach to a generic CHALMERS song is obvious and continues to this date. Opener "Utah" opens like an Animal Faces track before settling down into a chill, Secret Smoker meets Fugazi vibe, while "Biting Lip" hits a very dancey groove from about 1:30 onward. "Settling" plays with a interesting dichotomy as it wavers back and forth between near-lounge music and driving screams, and has some sick double screaming during its final 30 seconds, and closer "Map's Lost" also incorporates more dual vocals and comes off sounding more like Wolverines than anything else.

In 2014 CHALMERS released two songs as digital singles, although I guess both were really just demo tracks from their 2015 LP put on two compilations. "This is a Highway Psalm" appeared on a sick tape comp called 'United States and Japan: Underground Alliance' and it is one of my favourite of theirs. It is pretty lo-fi in its recording but the wielding of its power and control over the tempo shifts makes it as or more engaging than any other CHALMERS jam. The other song is titled "Boxing with a Ghost" and is a pretty typical CHALMERS song, riding the wave of some dreamy and twinkly guitars, making it perhaps more of a post-hardcore song than screamo, appearing on 'Seems Like There's a Show Every Night' comp.

Only a year later they dropped 10 new jams on the 'All the Songs Sung Wrong' LP. It opens with the incredible "20 Years", boasting the best vocals the band has ever recorded (and this continues the entire album). More playful guitars and the groove sections really make this track something special. "Success Story" has a highly infectious, subtle and jazzy opening riff that is so Off Minor that I'm goddamned smitten, especially when it is revisited with dual vocals about a minute in. "Boxing with a Ghost" and "This is a Highway Psalm" show up again here (and they're still great), the screams (at 1:05 in particular) and jarring nature of "Pushpin Constellation" make it a fantastic tune, "Negate Your Wish" has an extra layer or ingredient or something that gives it a shining aura unlike the other songs and is easily one of my faves. I should probably mention the similarities at times between this record and a lot of earlier The Reptilian material, as the vocals are almost mirror in sound and the extremely well done guitar mimics the twinkly tapping of Russ.

I only began listening to CHALMERS in 2018 when I nabbed the digital EP 'Death Practice' and became enamored by the instrumental close in "Bomag" that really nails that playful, mathy and catchy as fuck Birthday Boyz sound. The other songs are also excellent, as "Blossom Hell", "No Money" and "Exile Party" all manage to push the pedal even further down, as they all have additional oomph, are thicker, harder and somehow more intricate. Although it likely won't make my top 20 EPs list please note that it won't be far off, and it's without a doubt the best thing they've ever done

Keep it up CHALMERS, even if it takes another three years.