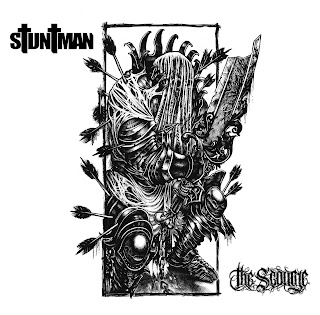 Yet another shoutout to Tim from Dingleberry Records, as in a trade with him I picked up some STUNTMAN 7"s because they said for fans of: Botch or Converge or Lamantide or something. After jamming their two releases in 2017 I became smitten with them and delved hard into their back catalog, with varying degrees of success. STUNTMAN have gone through an evolutionary shift over their nearly two-decade-long tenure with numerous lineup changes, but stating simply that the French band sounds like a mixture of Converge, Knut and Unearth is accurate and beneficial for any readers who might be craving more of that style. Certainly take note of the vocals, delivered venomously and viciously, sounding like Jacob Bannon but with a darker edge and less dinosaur-esqueness in its shriekiness factor. Jeebus, what a ridiculous sentence that was.

So I will run quickly through this discography according to bandcamp and not the band's actual history. 2004's 'Among the Ruins' is a punk/hardcore/metal album, which I guess we could just say metallic hardcore, but I feel its rooted more in punk than most. The vocals here are still a work in progress, as they lack a punch and kind of crackle across instead of giving me the heebie jeebies. The instrumentals are pretty strong and reminiscent of Unearth, although after hearing the later stuff I generally fly through this material rather quickly and will be unlikely to revisit.

In 2007 they released an EP titled 'Signed in Blood' which shows the band moving toward the metalcore and away from punk/hardcore. Songs such as "Jackal" and "Renegades" are pretty goddamned Knut with some haunting vocal work not far from Converge territory, making the latter one of my favourite STUNTMAN songs. The section right from 2:47 to 3:03 is fucking jaw dropping so I'd highly recommend giving that a listen.

2011's 'The Target Parade' takes things to a deeper and darker level. By 30 seconds into opener "Wounds & Visions" the listener is greeted with progressive guitar layering over their usual bloodbath of metallic hardcore or hardcore metal or whatever the shit its called.  "Fire Into Water" has the playfulness of Every Time I Die and maybe even Von Wolfe while "Sunstroke" is almost death metal with those gutteral growls and metallic riffing. A pretty decent record that is surpassed by its predecessor and successor.

Most of 'Incorporate the Excess' reminds me of  Knut's 'Challenger'. "Horn of Misery" hits some seriously frantic breakdowns during the first half and brings to mind my favourite Knut release, the intense and maniacal 'Terraformer', and that is one hell of a compliment. "Chaos Shepard" shows up again from the 2013 STUNTMAN compilation 'Scarce Tunes Overload [Anthology 2003-2013]' (unmentioned split songs, demos, live tracks) and blasts through in Converge and The Power And The Glory style, laying waste to the listener in just 2:03. Other killer tracks include "The Patriot, the Elite, the Icon", "Bag of Dicks" and "Roll the Skull".

I guess sometime in 2016 or perhaps very early 2017 they recorded a new batch of songs and started divvying them up to some 7"s, and I've got to say that it's this material in particular that has got me salivating for everything STUNTMAN in the future. Seriously, these new songs take the best parts of the pre-2015 material and hones it like a group of scientists working on a futuristic vessel to transport humanity to a new home. It's that refined. The first song to drop was "Parish" from the 'Cowards split' 7" and at 2:29 this thing will take your head off. A few seconds in everything bursts forth from the womb and decimates the speakers whilst employing some surprisingly catchy and groovy riffs. Then they released a one-sided 'Flexi' 7" with a single, blistering track titled "The Scourge". This might be my favourite STUNTMAN track and was my introduction to the band. It begins with a bass riff that leads the drums and guitars in after 10 seconds and that extremely quick tremolo picking in between the blasts is unreal. After 20 seconds of this they shift into a Botch-y and Deadguy sounding sophomore section with raging screams and guitar squeals that circle back around to that sick opening part by 1:25. The rest of the song is more ridiculousness played at breakneck speeds and sounding downright awesome. Also in 2017 they released two old songs recorded anew on the '400 The Cat & The Dawn split' cd.

It was only about a month or two ago that STUNTMAN slapped me around with another banger in 2018 with "Easy Prey" from their 'Art Of Burning Water split' 7". In the same vein as the 2017 material, it's extremely dense, dark, volatile and violent, complete with heavy chugs, squealing guitars and throat wrenching snarls. I really hope they've got more in the vault from these 7" sessions because I'm smitten over here. Smitten, I say.