Let's all take a knee and listen to every goddamn thing Daris King has to say, because after giving me countless excellent recommendations both via the blog The Poet You Never Were and personally, he sent me THE MAP SAYS WE'RE FUCKED and shredded my ears like very few do. The band released an 8-song demo, a single unreleased song and a live set at WUSC, and I guarantee fans of technical, shrieky onslaughts that resemble metallic screamo/emo-violence/grindcore will eat this up. The most obvious comparisons that pop out when I jam this are Warsaw Was Raw's 2014 LP, that band Orchid and Australia's Machina Genova. 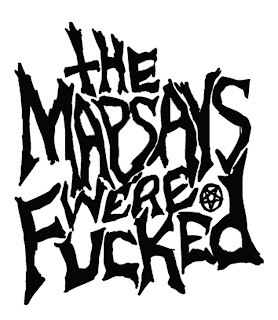 Opener "Roll For Damage" is a pummeling assault on the ears, complete with venomous snarls, lightspeed drums as well as hella guitar and bass mashin'. That transition to chaos just before 30 seconds is awesome, but not as awesome as the final 20 seconds which mash together dual shrieking and one hell of a hyperactive breakdown. "Lazerbeak, Rumble, and Ravage" is more accessible and lends more to screamo/emo-violence than grindcore/powerviolence, although that changeup at 39 seconds to sheer insanity is one of the most brutal/beautiful things I've ever heard. "Fuck your bumperstickers and Fuck your GOD" is a riot, crushing the listener while simultaneously glossing a nice layer of emo-violence over the entire thing. "Snakeskull" is not for the faint of heart, as it lays the screaming on real thick, especially from 1:30 onward...holy shit. And at 1:42 THE MAP SAYS WE'RE FUCKED transcends space and time, as they smash matter into nothingness. Speaking of nothingness, "Darryl" is 42 seconds of my brain through a wood chipper, "One in My Endzone" hints at screamo before Satan himself shits on your head, while "Golding Green Massacre" and "Pat Robertson's New Life in a Box" aren't far from the stuff that came out of Germany in the mid-2000s (Louise Cyphre, The Apoplexy Twist Orchestra, Tristen Tzara, etc.). The discography download also includes an incredible unreleased demo titled "Science Fuckin Science" that includes an utterly destructive riff that I have also heard in Tempano...but weeeeeeeow those last 15 seconds are bananas.

Daris King, I thank you again.