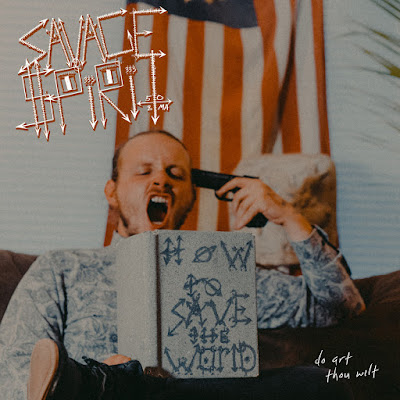 For fans of: Every Time I Die, Norma Jean, Prize The Doubt, Leveless, The Bled and Glassjaw
Bandcamp
Facebook

I was sent Alex McCormick's solo project SAVAGE SPIRIT and his new EP 'do art thou wilt' a month or two ago in hopes of premiering it on this blog. Over six years I have spoken with countless people, musicians and artists, sometimes connecting beautifully and other times sensing an obvious disconnect. When I read over Alex' emails, his diction and passion, it was pretty fucking obvious that this is the kind of person that I want to help, in whatever capacity that might be. Luckily Alex and I are fully immersed in hardcore/metal and the like, so helping premiere the new 6-song album was a no-fucking-brainer. It is an excellent piece of work. It is riveting. It is smart. It is honest. It slaps. Alex wrote these songs over the last two years, hoping to find musicians in order to round out the band in a live setting...but no avail. Wait, maybe Alex should just explain it...

Aside from wanting to put on a unique and energetic live show, one of those cool things is a music video laced drama film that I wrote for this EP. It's based on true events that happened in my life within a span of 2 years. I'm a commercial fisherman. It generates enough cash flow to keep a roof over my head and fund all the things I've needed to do in order to bring this EP from demo stages to solid recordings and album art.  Being a touring musician/national act has been an aspiration of mine since I was 15 and started my first band. In that process I've averted a "real career", have gone homeless so my money could go towards studio time and rehearsal space rent/merch/etc, I've compromised personal relationships and sadly so have even plummeted myself into some gnarly depressions trying to keep this dream alive. The older I've gotten the harder it's been to find other people who wanna make a career out of music or...get in a van, film everything, produce content, STAY on the road (until something gives and people catch on), and essentially take a risk by leaving their well paying jobs to pursue creating something bigger than themselves. I still have too much gas in the creative tank to give up on that. I'd rather die failing at what I love doing than settle for a life I don't love. Some people look at their records and just think about the good times, the fun times. To be fair they should. However it's more to me than just that. These are musical staples in time that will let anyone who may give a shit about me when I die know where I was mentally and sonically through out the course of my life. Some of these documented times were really far out and interesting. Fun even. Some of them are really fucking darkly inspired by both some pretty tragic events in my life and the city I grew up In as well as some of the really unfortunate ways this place has absolutely destroyed many of the people I've cherished most growing up. How these events affected me and how I felt while dealing with them 100% shaped the content of this record. I'll never be 100% happy with anything I put out. Always room for improvement and innovation... but.... I'm very proud of this EP. Means more than I may be able to put into words. Hopefully they resonate with you!

The opening title track is nearly five minutes in length and covers a lot of ground. The song doesn't really get going until the 30-second mark, at which point it careens around the road smashing into mathcore, metalcore, hardcore, post-hardcore and some proper singing as well. There's a fair amount of spoken word on this track too, giving it another layer not normally utilized in traditional hardcore fare.

(2018) SAVAGE SPIRIT - 2 - "What comes up might go down" (from 'Do Art Thou Wilt')
This song is pretty goddamn metalcore and I'm loving it. Obvious comparisons right off the bat are Norma Jean, Von Wolfe and Every Time I Die. Imagine if all of the slower, chill parts were taken out of the first track and it just goes all out for its 2:10 tenure.

(2018) SAVAGE SPIRIT - 3 - "PR Nightmare" (from 'Do Art Thou Wilt')
Hot damn, another cinder block over the head with this song. This might be the densest, heaviest of the songs, bringing to mind Leveless and Druse, although the midsection and last half feature some excellent vocal work, again bringing Every Time I Die vocalist Keith Buckley to mind.

(2018) SAVAGE SPIRIT - 4 - "Nodcopper" (from 'Do Art Thou Wilt')
Want some intricate and sick instrumentals? Well, I think this might be the ticket for you, as the guitars alone during the intro are spectacular. This is likely the most versatile song, as it manages to never stay pinned in a single style for more than 30 seconds, and within that I feel like their may be some System Of A Down and Protest The Hero influence...but I'm just assuming.

(2018) SAVAGE SPIRIT - 5 - "Surrounded by heaven, covered in hell " (from 'Do Art Thou Wilt')
This track as well as the closer were already premiered on the SAVAGE SPIRIT bandcamp page but I might as well tie this post up properly. This first minute is downright eerie, awkward, jangly and bi-polar. It ends up building into a fantastic transition for the rest of the song, which is much more targeted, destructive and venomous. Aside from the crooning prior to the first minute, there's another stellar section from 1:48 to 2:15 that revolves around one hell of a guitar hook which transitions to a behemoth of a breakdown.

(2018) SAVAGE SPIRIT - 6 - "$.t.r.u.g.l.i.f.e (we out hea)" (from 'Do Art Thou Wilt')
The closer opens with a plethora of feedback and arguments, which are clung to until the 45-second mark when the first strum of the guitar is hit. This builds with the drums and vocals until 1:18 when the lid pops and biting, metallic hardcore spews forth. Writing this must have taken some serious effort, as the song bounds around like a rabid patronus charm, attacking anyone within jaws reach. After exhausting itself at 2:42 "$.t.r.u.g.l.i.f.e." recedes back into white noise (one would assume in order to take a breather) and then empties the tank during its final 40 seconds.