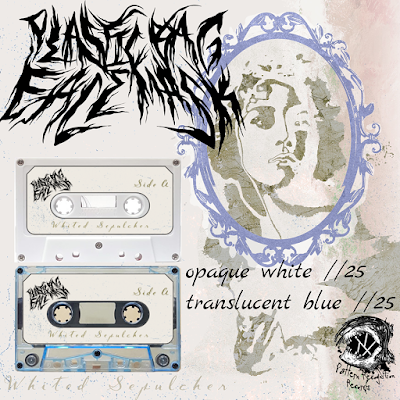 For fans of: Moxiebeat, WristMeetRazor, Savage Spirit, Euclid C Finder, Between The Buried And Me and Destroyer Destroyer

Are you feeling warm and cozy leading up to some possible holidays? Well fuck you, PLASTICBAG FACEMASK is going to tear your face off instead. Mixing a myriad of extreme styles, including hardcore, death-metal, noise, mathcore, metalcore and grind, the California duo have been around kicking ass since 2008. They are premiering their first song "Triangle" off of the 'Whited Sepulchur', sent to me by Erin of  Pattern Recognition Records who will release the 6-song cassette EP on January 11th, 2019. The 50 tapes are divided into 25 translucent baby blue and 25 white tapes with art from SeeYouSpaceCowboy's Connie Sgarbossa. You can pre-order them here.


(2018) PLASTICBAG FACEMASK - "Triangle" (from 'Whited Sepulchur')
The song opens with the instrumentals getting jammed down your throat with an onslaught of grindcore/powerviolence. It's invasive, it's pummeling, it's awesome. The song takes a brief breather at 18 seconds only to be forced back into play at 26 seconds using a barrage of a drum machine. It's at this point that the vocals kick in too, which should be noted not only for their ferocity, but also their range. The mathematical precision of the following section is jawdropping as well as sugary sweet to the ear. Seriously from 30 until 60 seconds is fucking fantastic. After this the song whips around the room like a rabid three-year old on speed, switching speeds, styles and doing so in epic fashion. At times this sounds a bit like Moxiebeat (I think it's the vocals) and at other times Between The Buried And Me (mathy noodles and a ton of change-ups). In conclusion, whatever may be happening in any given song at any time, PLASTICBAG FACEMASK definitely lives up to their name - completely smothering the listener.
Posted by Dave Norman at 10:28