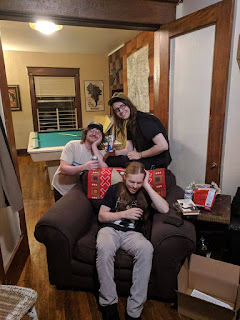 Well hot damn are you ready for a week bursting with premieres? No? Gawwwwdammit. Screw it, we're doing this anyways. The first premiere this week comes from Kansas City's BIG WATER. They released the first single from their debut EP 'Drink More Water' in November called "Half-Eatin' Sandwich" and floored a lot of people with their dirty, sludgy nods to late 90s screamo. Over the next three weeks you will hear premieres from this EP on a myriad of blogs but let's start here with track one, the exclusive premiere of "B.M.". And you shalln't be disappointed, I promise you.

Some quick info that has not been released: 'Drink More Water' can be found physically on 125 tapes, with 41-42 copies on your choice of dark blue, light blue or clear blue. The cassettes will be released by the band, The Ghost Is Clear Records and Zegema Beach Records with pre-orders going up on Friday with the next song premiere.


(2018) BIG WATER - "B.M." (from 'Drink More Water')
This track is fucking awesome and is the perfect introduction to a killer demo EP. "B.M." wastes zero time and goes full speed right from the get-go, complete with crashing drums, hyperactive bass, frenzied strumming and thick, broken screams. At 42 seconds the song transitions into a palm muted build that'll get your blood pumping, and by 53 seconds it has morphed into a an extremely driving, slightly jarring beast of section that brings older, playful, dancier screamo jams like Robots Don't Cry, D'Amore, Daniel Striped Tiger and Sometimes Walking, Sometimes Running as well as new bands such as Snag and Hawak. The chills out a bit for the outro twenty seconds, but I mean chill like Heritage Unit and Slow Fire Pistol, which is perhaps just as reminiscent of the EP as the other 75% of the song. More songs coming your way soon, so if you like this you're in store for a pretty dang good December.
Posted by Dave Norman at 07:40