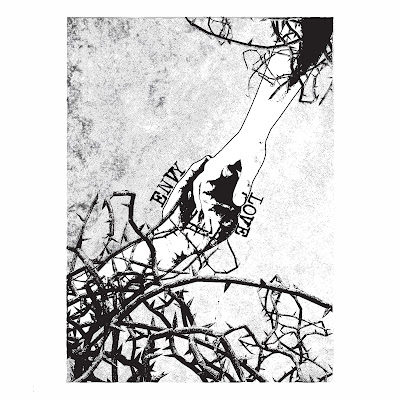 So here we are, after what seems like forever, I get to premiere the labor of love that has been brewing since early 2017, the ENVY/LOVE 12" tribute compilation. Since the entire thing was my baby, I guess in the end it only makes sense for me to premiere it in its entirety right here on (((((OPENmind/SATURATEDbrain))))), and maybe throw in some facts and thoughts not circulated elsewhere.

This comp was first conceived as an improvement on the Jeromes Dream tribute compilation, as that cover comp was someone else's baby that I kind of adopted. It's a great tape with a lot of awesome things on it, but I knew that some of the bands weren't really even aware of Jeromes Dream before deciding to hop on the tribute and a lot of bands that were initially interested in it dropped off and we had to ask for help in getting all the tracks that we did. After it came out I was very stoked, but realized quickly that I would have done it differently from the get-go. Deciding to rectify this, I spent a few weeks thinking of a band that I loved and was very influential, but had difficulty being totally sure of many choices. A few included Off Minor and Neil Perry but it didn't seem like the time for that. Now, though...

Anyhoos, so one day it hit me, ENVY. Holy shit ENVY have influenced myself and countless friends to a degree few bands can even daydream of. I realized quickly that I knew a lot of bands that were mature enough to both write a cover true to the original while simultaneously making it their own. I sent out no public messages, but contacted bands that I loved and felt were obviously influenced by ENVY and played a style congruous with the Japanese post-hardcore/screamo that they perfected well over a decade ago. Some bands answered my initial question with, "We never really got into Envy," to which our conversation about contributing stopped. One notable band even told me that ENVY was so good, they didn't want to possibly ruin a song, which I completely respect.

The initial idea was for it to be a 2x12" but I quickly realized that the groups I really wanted to take part had been contacted and some had already started to submit songs, so I capped it at a single 12". There was but one hiccup that was cleared the day it came up. Croatia's Mališa Bahat lost a band member and realized they wouldn't reach the deadline in time. LKTDOV from Indonesia had emailed also asking if they could take part in the comp, as I had premiered the first single (Shizune's cover) just days before, thus letting the information about the tribute album public for the first time. I love LKTDOV so that problem fixed itself instantaneously. The Japanese band AGAK informed me that they wanted to take part but were unable to have a song completed before November, so we decided to include their cover as a digital accompaniment to the tribute.

Everything else went very well. Connie Sgarbossa did the fantastic artwork. Jimmy Stellwagen from Niboowin mastered a few songs and did the complete album master. All the bands contributed fantastic covers. So, without further ado, ENVY/LOVE, in its entirety.


(2018) 1 - BEAST JESUS "Chain Wandering Deeply" (from 'Envy/Love' comp)
Choosing the opening track from the first Envy record I ever purchased, the breathtaking and transitional 'Dead Sinking Story', putting the Philippines' BEAST JESUS as the opener for the tribute was a no-brainer after hearing the cover. Seriously, parts of this surpass the original, as they had a guest vocalist Mia Nakano (ex-Caitlyn Bailey) sing some parts (she comes in around 1:18). The song opens with the atmospheric silence of the original before hitting the gas hard 32 seconds in, includes the prodigious breakdown at 2:41 and some seriously stunning vocal work by the guest vocalist as well as great screaming and  as per usual from my friend Francis Maria Regalado. Is it 8:46 in length? Why yes. Yes it is. And it's incredible.


(2018) 3 - LKTDOV "Black Past" (from 'Envy/Love' comp)
The final addition to the physical 12" was LKTDOV from Indonesia and their short stab at "Black Past" originally housed on the 'From Here to Eternity' LP. In 1:52 they rip through the opening the way Gillian Carter would likely have done, but at 45 seconds they include a fantastic, spacey hook that lays a backbone to the dual screaming going on. Good lord, this cover was even better than I had expected.


(2018) 4 - CROWNING "Farewell to Words" (from 'Envy/Love' comp)
Chicago's CROWNING premiere shit here on a regular basis, so this was released unto the world a few months back, but that shalln't stop it from perpetually smashing your face in. Their 2:06 cover of "Farewell to Words" from 'All the Footprints You've Ever Left and the Fear Expecting Ahead' is unrelenting, awesome, very CROWNING and huge come 1:30. Check out the premiere and more of my thoughts on them here. They was such an obvious choice after they got fucked out of appearing on the Jeromes Dream comp. Yeah, still sorry about that...


(2018) 5 - NIBOOWIN "Left Hand" (from 'Envy/Love' comp)
Ex-Old Soul's NIBOOWIN are from Michigan and contributed an amazing cover of one of my favourite Envy jams (taken from 'All the Footprints You've Ever Left and the Fear Expecting Ahead'), and do so it fitting NIBOOWIN style. It's raw, driving, blackened and similar to Envy without sounding like a clone, although the vocalist inherently has a strong Envy thing going on, which doesn't hurt. I love how pummeling this cover is, as it doesn't even take a breather until almost 1:30 when they float around in space for awhile before returning to Earth at 2:06 and kicking our collective ass all over again.


(2018) 6 - APOSTLES OF ERIS "Spiral Manipulation" (from 'Envy/Love' comp)
Also taken from 'All the Footprints You've Ever Left and the Fear Expecting Ahead' (because I think it's probably the general fan favourite, me included) is "Spiral Manipulation". This cover is Jesse Mowery's solo project that I now do a lot of vocals on. This particular cover is primarily Jesse, and good lord does he take those catchy guitar riffs to town. Seriously, the guitarin' on this track is stupendous and is taken in like an intoxicating drug, just like his progressions in his other bands Majorel and Altar Of Complaints. I think out of all the tracks on this tribute, this and Respire sound more like the band that performed them rather than Envy.


(2018) 7 - RESPIRE "Go Mad and Mark" (from 'Envy/Love' comp)
A track that I'm sure tons of people are here to check out, is Toronto Canada's RESPIRE and their mesmerizing seven and a half minute cover of "Go Mad and Mark" from 'Dead Sinking Story'. After an Envy-esque intro, the song takes a stunning turn at 1:01 when the violin swings in, bringing tears to my eyes. When the first climax hits at 1:52 prepare yourself for the first of many changes of underwear. It then hangs about in classic RESPIRE territory until 3:20 when the song begins to swirl in the winds of a chorus of voices chanting over that beloved trumpet. After a quick daydream the song wakes up just after the five-minute mark into an instant climax that builds on itself like a massive wave that never seems to crash, and instead rises higher and higher, finally spilling everywhere at 6:22 in a gorgeous, sprawling and epic display of the band's prodigious talent. Goddamn, what a ride. Ooooo, also, something worth noting is the imminent release of a music video for this song created by Dave Cullen of Crowning/Zegema Beach. Shit looks amazing.


(2018) 8 - GILLIAN CARTER "0 and 1" (from 'Envy/Love' comp)
Oooooo damn a new GILLIAN CARTER tune that is also an Envy cover and it nearly eclipses the seven-minute mark. It's great to note that the band chose "0 and 1" from a later release, 2010's 'Recitation' to be exact, stretching the tribute's chronological window by a few years. On this cover we are met with a vast, dark and melancholy GILLIAN CARTER that dumps the shreds and panicked screaming for a delivery much larger in scope. Setting a mood first, it isn't until about 1:40 when a gargantuan riff meets broken, passionate screams that the song gets moving. Once started this behemoth is unstoppable, and definitely has some unexpected sludge and doom vibes permeating the cover. And a truly epic cover it is.


(2018) 9 - CARCAJOU "All That's Left Has Gone to Sleep" (from 'Envy/Love' comp)
I contacted Montreal's CARCAJOU (ex-Nous Etions) after seeing them live and being blown away, and they chose "All That's Left Has Gone to Sleep" from 2007's 'Abyssal'. It's a driving, almost-dancey take that hits the original's chorus like the best of them. Like Niboowin, Jonathan's vocals were made for this kind of delivery and the screams are layered on hella thick, as is a very cool, CARCAJOU-esque jazzy midsection. Speaking of CARCAJOU, they just released a 10-minute song the other day so I highly recommend checking that out, too.


(2018) 10 - SHIZUNE "A Far Off Reason" (from 'Envy/Love' comp)
Italy's SHIZUNE have been around a while, and vocalist Enrico even speaks Japanese, so when they found out about this comp they asked me if they could participate and I almost lost my mind in an explosion of pure joy. They chose an excellent track, initially released on the Yaphet Kotto/This Machine Kills 3-way split in 2003 that many people discovered via the 'Compiled Fragments' collection album. It was the lead in the charge for promoting this comp as I included it as the opening track on the July 2018 Zampler #11 - Death From Above cd compilation. This cover is fucking excellent and perfectly blends Envy with SHIZUNE, and even injects a little Yaphet Kotto love, according my inside source...SHIZUNE lol. You've likely already heard it but if not, this is jaw-dropping in every way possible.


(2018) 11 - AGAK "Angel's Curse" (from 'Envy/Love' comp)
We premiered this just a few days ago over at the rabbit hole that is Idioteq.com with some commentary from the Japanese screamo band. AGAK are ex-Tetola93 and blend a very harsh and violent style of hardcore with screamo that is obviously in itself rooted in Envy love. Their cover takes us back to 1999's 'Angel's Curse Whispered in the Edge of Despair', but goes back in their time machine very angry sounding indeed. Following 24 seconds of feedback the band barrels forth with no regard for safety. After the first 60 seconds they add more and more melody to the cover, slowing it down almost completely at 1:40. At this point layered death-screams can be heard (soooo Tetola93) as the song swings into its climax...although I'm unsure which is the primary one because there are a lot of ridiculous moments embedded in final minute and a half.

I hope you have enjoyed this compilation tribute to Envy, one of the best bands of all time. Thank you for taking the time to check out something that I have worked very, very hard on. 💘 Please consider grabbing a copy from the Canadian/International store here.
Posted by Dave Norman at 23:29