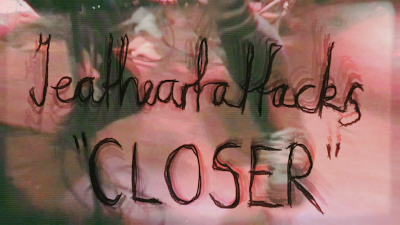 For fans of: Transistor Transistor, JR Ewing and The Jonbenet

In November we posted a review of Norway's IEATHEARTATTACKS because Dave has been smitten for quite some time now. That post had a nice domino effect, as not only am I able to share this brand new song and music video for IEATHEARTATTACKS, I will be releasing their latest LP 'Please Just Dance Death' on cassette tape via Zegema Beach Records AND premiering another new song on the January 1st, 2019 Zampler #12 - Oh God, We're Gonna Die compilation!!! Well shit, that's a lotta good news!

In regards to this video premiere for "Closer", it's one of two unreleased songs from their second album that doesn't have a release date yet. The video was made by Gøran Karlsvik, while the songs were mixed by Andreas R.Westhagen (Carnival Kids, Twin Pines Mall) and mastered by Martin Bowitz (The Spectacle) at Strype Audio. Enjoy!


(2018) IEATHEARTATTACKS - "Closer" (from upcoming LP) official music video
The song is 2:31 in length and begins with an isolated, fuzzy guitar that collides with the rest of the instrumentation 23 seconds in. The next section is a matured, dense and epic sounding instrumental passage that closes the intro and transitions into the first verse of high-pitched screams (ala Billy Talent but much heavier) and drums over a distant guitar. At 1:11 the first chorus hits and hits like a ton of bricks before dipping back into the first instrumental section again, but this time layering it with dual screaming and doubling its length. The final 35 seconds has the song slowing disintegrating into nothing, leaving an ethereal trail behind the very driving, hook-laden lyric video. Oooo baby.
Posted by Dave Norman at 10:17