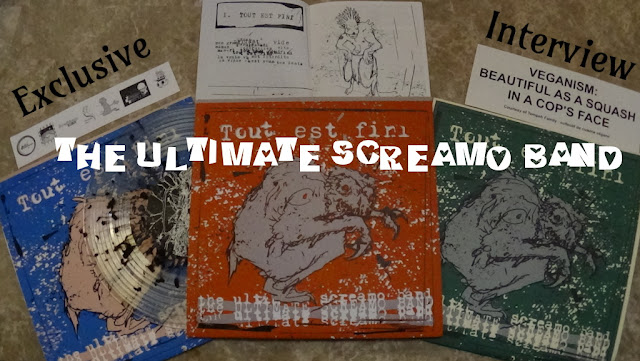 Buy the 7" split from ZBR here

Damn, I love me some Arch. Arch is the brain and body behind THE ULTIMATE SCREAMO BAND, a now internationally toured solo project with a few core friends helping out during those shows. In 2016 they began touring and hit up the Zegema Beach Records Fest in 2017 (videos linked here) and ventured south into the rather unstable U.S.A. with French Canadian friends Commuovere. In 2018 Arch hopped over to Europe and played Miss The Stars Fest, among other shows, and truly cemented his place as a lover of screamo and one hell of a beautiful person.

With the release of Arch's new 10" titled 'Tout est fini', I again helped out for the third straight time in helping release it with Zegema Beach Records and found it necessary to ask Arch a few questions. Before we get to that, a quick release history is in order. If you'd like to read full review of first 7"EP titled 'La saison du champignon' and released in 2015 then click here. 2016 saw another 7", this time a split with Russia's 'Lora', which can be read (and is at the very bottom) right here. In spring of 2018 the digital version of 'Tout est fini' was released and the labels have just received their copies, so this thing is shipping out now. No pre-order needed for this, just jump on them quick! The 10" comes on clear w/black splatter vinyl/317 with a choice of blue, green or orange jackets. Lyric booklet included as well as download code and bigass sticker. 10 tracks. Nab one from myself right here.

The name ULTIMATE SCREAMO BAND was originally the title for a screamo mixtape made up of cover songs of my favorite screamo bands. I never finished it. The name was later officially used for the first time when I created a bandcamp to upload a screamo song I made up for fun. I never thought I would write more songs...but I kept this name. I attribute a lot of different meanings to it now. I also feel it is a meta-reflection on what we call ‘screamo’, ‘punk’ or even on what is called ‘a band’.

How long was The Ultimate Screamo Band considered a solo project for you? You tour with people but still record solo, so do you still see it as a solo project?
It was always considered a solo project. The idea is to try to create records with the soundscapes I am looking for, with total artistic freedom. The songs on the first EP were never meant to be played live. I started playing shows as a pretext to travel and meet new friends. So far, four different people have joined the project on stage, at different live performances since 2016. I am very grateful to have friends willing to accompany me and play these songs live, and to travel with this music. In the future, I plan to make a ‘family album’ and to include my friends in the process. It should be interesting.

Can you please tell us about your recent European recording experience?
Basically, I went on a vacation in Europe in 2017. When I was over there, I thought it would be a good time to be creative and I simply asked online if someone knew of a cheap way to record some stuff on the fly (it is the beauty with being a one-person band). The whole writing and recording took place in 5 days (except for one song that was already written). Drums, guitar, bass, vocals. I use a lot of ‘controlled improvisation’ techniques to create the music. It is my basic principle; everything is sort of improvised and rethought, redirected—even the lyrics.

What is "Tout est fini"? Why the title? Is there a theme on the record or is each song its own piece?
‘Tout est fini’ literally means ‘All is finished’ or ‘Everything is over’. It is the first sentence of a novel I really enjoyed (‘L’invention de la mort’ by Hubert Aquin) and it is basically a melodramatic catchphrase that the main character repeats in the book, retelling the failures of past relationships. The album is an echo to that. It is largely inspired by the book. And in a way, it is a farewell album. From a screamo perspective, this title, ‘Tout est fini’, for a 10’’ record is in turn and answer to ‘La Fine non è la Fine', or 'All Our Tomorrows End Today', or even to 'Dance Tonight, Revolution Tomorrow'.

How would you define your music?
Fast, emotional and aggressive punk, heavily influenced by the hardcore emo-violence scene of the late 90’s and early 2000’s, with a bit of a metal influence, I guess.

You have a European tour coming up, do you not? Tell us about that.
The European tour 2018 came with the release of the 10’’ 'Tout est fini', which was recorded in Germany in July 2017. I made so many new friends during this trip!

We (the band) played with TO LANGUISH, SALIGIA, SUR L’EAU, AU REVOIR, RAINMAKER, MARJORY STEWART-BAXTER, KAFKA, LESSENER, ECHELONS, WE WATCH CLOUDS, NO VALUES, JANPALACH, PORTRAYAL OF GUILT, LAUDARE, LOATHER, NAVRÉ, ZEUS!, VALERIAN SWING, DAYLIGHT ROBBERY, CENTURIES, LINGUA NADA, KŸHL, TE:RS, and so many others at the MISS THE STARS FEST V. We played eleven shows in Germany, two in Poland, two in Austria and one in Czechia.

I never thought ULTIMATE SCREAMO BAND would go this far, but I find this very motivating—and I want to write more music.

What can you tell us about last summer's tour at ZBR Fest and throughout Canada and the U.S. with Commuovere, who are now sadly broken up?
The USA tour was great! ZBR FEST was amazing! Commuovere was one of the most promising screamo bands out there, and it is a shame that they disbanded. I think all the members have new projects now. We had so much fun with them in the U.S. There has been talk of starting a new emoviolence project with members from both bands. We’ll see!

What is next for Arch and The Ultimate Screamo Band after the Euro tour? 'Family Album'?
Maybe there will be more shows in 2018, but nothing is official at this point. I definitely want to go back to the States and say hi. I also started working on a new split 7-inch project with a band from the U.S. and it should be announced soon. After this, yes, the Family Album will be an attempt at creating a longer record with the live musicians and friends of ULTIMATE SCREAMO BAND, but still produced in a similar fashion. I think it can be a fun experience in the life of this project. I might have friends from afar doing some guest parts also. Stay tuned!

Thanks for the interview!