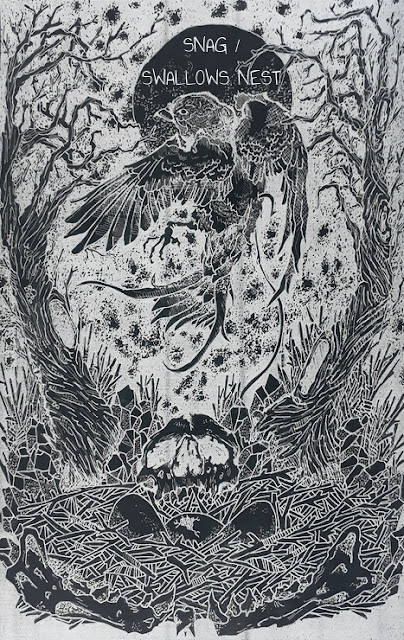 For fans of: Welcome The Plague Year, Marat and Dangers!
Split 7" w/Crowning on Bandcamp
Facebook

I haven't lived in New Zealand for over six months, but that doesn't seem to be slowing me down from continuing to produce output from that beautiful country. Today's post is an exclusive premiere for a music video from SWALLOWS NEST and is titled "Apathy as an Infinite Manifestation". The song will appear as the last track on the 'Snag split' cassetteEP+poster releasing on Zegema Beach Records digitally in late June and physically in July.

This was pretty much the first song we wrote, or at the very least was in the first batch of three songs that we wrote as a four-piece and was initially called "Parents Intro" for more than obvious reasons if you are aware of the very influential New Zealand band Parents. It's got a lengthy introduction before about a minute of standard-sounding SWALLOWS NEST before delving deep into a seismic breakdown at the end.

The video itself is a mash of band practice videos and shots of New Zealand that I took on my travels while living in Dunedin from August until December 2017. Most of the shots are in and around Dunedin with a fair amount also coming from our trip to Milford Sound. There's never a time not remind the folks still in New Zealand, especially those in SWALLOWS NEST, that I miss them and I love them. This is also my first completed attempt at making a music video, which is something I've always wanted to do.

Look for the full SNAG / SWALLOWS NEST split cassette and poster premiere on Sophie's Floorboard in late June, likely the 26th. I've got the posters here so we're just waiting on the cassettes to arrive so a physical release date of early July seems more than reasonable. Just so you know, the Snag song is going to blow your fucking mind. Honest to gawd truth. Oh, yeah...and now, the "Apathy as an Infinite Manifestation" music video. Hope you enjoy. 💞