It's just nuts to think that in less than 24 hours I'll be at the second Zegema Beach Records Fest. As I scramble to try and get everything ready before catching the ferry tomorrow at lunch, I figured I'd reminisce a little about the first 2017 Zegema Beach Records Fest in Toronto as well as showoff the 2019 ZBR Fest (#2) in hopes to meet some new people this weekend.

Well, first off, I had a poster made that I wasn't able to use so goddammit let's use it now. Thanks to Ania for the poster and all the edits I kept sending.

I have just deactivated the ticket pre-sales so everyone who bought a ticket just needs to tell me the name and address from their order and you'll get a bunch of free shit at the door. You can check out the Zegema Beach Records Fest 2019 website here or check out the event pages for Day 1 (May 31st) here, Day 2 (June 1st) here and Day 3 (June 2nd) here.

The first Zegema Beach Records Fest back in 2017 was a surreal experience. I had tried a mini-fest a few years prior in Hamilton (review and videos linked here) with very poor attendance (and it fucking had Respire, Edhochuli, Terry Green, Black Love and Old Soul...to name a few!), so I was worried to shit about it for the full fest. As we booked that pre-fest night months in advance we didn't know we'd be competing with a Daughters show...and we lost. But for the proper Day 1 and Day 2 shows it was the complete opposite. Day 1 in particular was packed, especially at the end when Respire put forth a stirring performance and I remember looking out during the final The World That Summer set and seeing Luke Hoskin from Protest The Hero among the sea of my friends' faces and I nearly cried. 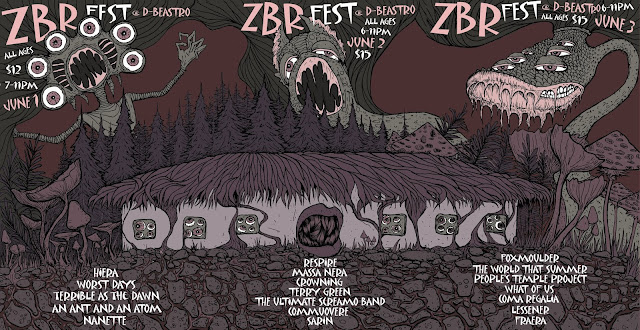 As I'm trying to get ready for this second fest I have left out some amazing bands in the smaller list below and I apologize. I love you and you were amazing, and another reminder that all the videos I took from those nights can be seen in the review posts for the pre-fest show here, Day 1 here and Day 2 here.

CROWNING / I was probably most excited to see them over any band at the fest, and holy smokes we didn't see the extended ending/breakdown coming and it destroyed everyone.

PEOPLE'S TEMPLE PROJECT / I still haven't heard this opening song recorded yet and it might be my favourite of theirs. It's short and it's fucking amazing.

WHAT OF US / I'd been wanting to see this band since their inception and they did not disappoint. My band followed and my drummer asked me, "How the fuck are we supposed to follow that!?!?"

COMMUOVERE / Considering the band broke up shortly after this tour I can honestly say this was one of the most important sets I've ever seen in my life. They tore shit up, good god science almighty.

TERRY GREEN / My bestest of friends and present at pretty much every ZBR show in Ontario ever, Terry made me cry.

RESPIRE / Yo...Respire. I need say nothing else, except maybe that this video is one of the best I've ever shot.

TERRIBLE AS THE DAWN / An incredible two-piece that too many people missed out on because they were on the pre-show day. Definitely check this shit out. Oh, and we put out their tape :)

MASSA NERA / The only returning band from the first ZBR Fest is my entire family's good friends Massa Nera from New Jersey. The pretty much stole the fest and they had lost their vocalist just a few days prior...so yeah, this time I'm beyond fucking excited.