For fans of: Converge, Deafheaven, City Of Caterpillar, ['selvə], An Autumn Of Crippled Children, Nic (aka ██████) and Respire

'everyone goes away eventually'
Bandcamp

I've said it before and I'll say it again, Maya Chun's BLUE NOISE is more than remarkable - it's fucking breathtaking. The screamo/black-metal/post-everything solo project from Ann Arbor, Michigan is influenced specifically by Deafheaven, City Of Caterpillar, Rosetta, Isis, Republic Of Dreams, Alcest and Ostraca, so chances are anyone reading this will love it. It's epic, cathartic, existential bliss that I simply cannot get enough of. 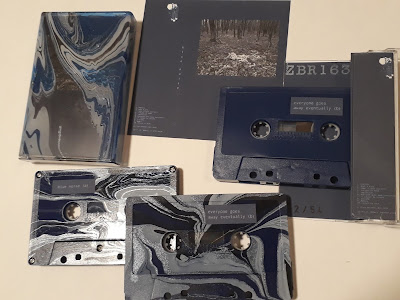 The title track to the LP is, to put it lightly, fucking stupid good. Following a brief but jarring feedback with subdued drums intro, the song lets loose like a storm of death come 20 seconds. Those agonizing shrieks, lightning drums and violent guitar/bass culminate at 40 seconds in a massive serotonin release thanks to a sensational, mathy, Edhochuli-swing. This somehow transitions beautifully at 1:20 and shifts to an almost pop-punk vibe...is it Leer? Fuck I dunno but that's a helluva hook. The next 20 seconds are dedicated to an explosive in-and-out breakdown over-top a swelling atmospheric riff that exhausts itself by the two-minute mark. Yet, instead of extinguishing it lingers, offering a womb-like embrace for another minute-and-a-half before concluding. That's a fuckin' experience, holy shit. So far this is the best song I have heard in 2019.

I thought I'd just post a few notes about each track, or this would turn into a very long post.

3 - "take it upon thyself" (3:30) / the anguished shrieks along with a synthy-sounding An Autumn Of Crippled Children section post-one minute

10 - "return to form" (4:41) / pretty ambient until about two minutes when the album finally goes supernova

BLUE NOISE review on OMSB
Posted by Dave Norman at 02:29