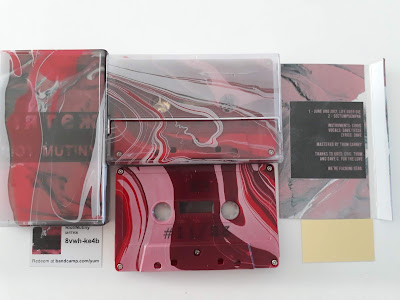 I don't like to review a band that I play in, primarily because I lose my sense of objectivity and tend to diminish my own accomplishments and nitpick all of my mistakes. So instead, today's review comes from Jesper, a 24-year old musician who operates from Gothenburg, Sweden and plays in Young Mountain, Nathan Aeli & Raft. This is their first review on the blog.

Track 1: "June and July, Life Over Die"
Starting with a swirling cascade of emotions followed by a reminiscing soundscape, in the style off of Cult Of Luna's classic album 'Somewhere Along The Highway' the first song ''June and July, Life Over Die'' then evolves into a vibrant, ambient march towards the next conquest. The vocals are right in your face where they should be, spitting out whatever hardship there has been. Solitary, sad and stubborn is how I'd describe the scenery in which MRTEX journeys onward with this new release.

Track 2: "Sectumpsempra"
''Sectumpsempra'' twists on itself, a complete circle to then devour it's own tail. Spastic, self-destructive and venomous just like if Ouroboros would be envious against this aggressive beast of a song. Once again the Cult Of Luna/Post-metal homage returns after the first half to give us some closure to this sonic assault. I'd look at these two songs as twins separated at birth only to reunite with the same experiences but with different aggression, creating a significant difference between them both but still tying them together.

***editor's note
As I am the vocalist for мятеж I can say that this is the final proper мятеж release. There will be a discography tape released near the end of 2019 housed in an encyclopedia with song lyrics, explanations, pictures, one new song, all limited to 17 or something silly.