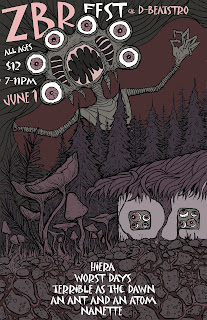 On June 1st, 2017 I put on the pre-fest show for my Zegema Beach Records goodbye party in Toronto, Ontario at D-Beatstro. This date was added to the initial June 2nd and June 3rd shows because I was contacted by numerous bands asking to play, but the latter two dates were already full. And that is how this show was born. Truth be told, the bands were amazing bands but the turnout was poor, possibly due to bigger bands playing on Friday and Saturday, but more than likely because Daughters were also playing Toronto that night.

It was very special and intimate and I know everyone that made it out enjoyed the bands. Thank you so much to those that came out, bought presale tickets, D-Beatstro/Sam and the five bands that played. Linked below is a short reel of each of the bands performing and will give you a good idea if you should invest further time checking them out. I've also linked each band's additional videos, Bandcamp, Facebook and merch in the ZBR distro. You can also grab the pre-show poster here (limited to 30) or the entire fest 3-in-1 35"x18" poster here (limited to 14).


AN ANT AND AN ATOM
AN ANT AND AN ATOM is the solo project from my friend Sean. We met through Ebay while he was in South Korea a few months before I moved there in mid-2008, all thanks to that Red Sparowes/Gregor Samsa split cd. Enough history, he plays ambient noise and sent the room into deep contemplation for about 20 minutes. He's been doing this music for almost a decade or more and has become very proficient at it. I really enjoyed this set as an opener because it set a mood for the show I had not yet experienced. He was on tour with his mom which is fucking rad, and so is she!


NANETTE
As per my request, my local friends in NANETTE closed with a cover of "This Isn't The Tenka-Ichi-Budokai" by I Hate Myself cover that I was able to scream/whine along to and it felt delightful. Their other four or five songs were an interesting mixture of screamo and an 80s/shoegaze sound. The three-piece recently released an EP here that I premiered a song from (linked here). I am very intrigued to see where they go next. I found out after the set that the two songs I didn't record were new songs and the best of the night. Damn my infernal choosing of songs to film!

TERRIBLE AS THE DAWN
This duo came all the way from Ann Arbor, Michigan for this show, and holy smokes they certainly didn't disappoint. They played new stuff, they played old stuff and they sure as hell
blew everyone away with "Stains", which I've linked below. That song in particular sounds like an awesome mixture of shrieky post-hardcore with tinges of emo-violence. The dual vocals compliment each other perfectly and the jammy sections were nice to groove along to. But the opening and ending, dear lord, that shit is unreal. Caroline and Stephen were extremely nice and it also wanted to note that the videos are pretty cool as Stephen's face looks as if he's screaming/talking to my grandfather's face on the Zegema Beach Records sign 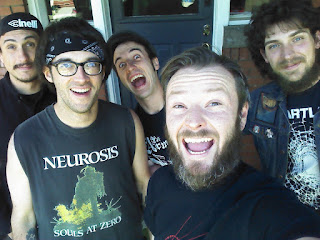 These Providence, Rhode Island fellas stayed at my place and we seemed to get along swimmingly. Chris (drums) was all over the cats, Josh (bass) and I traded a ton of distro stuff, Matt (vocals) and I discussed a ton of screamo and Alan (guitar)...well, that guy was fucking tired from a ton of driving so I called him Sleep. They played a killer set a hair over 20 minutes and pulverized the crowd with a violent take on hardcore. I tried a little too hard to find a genre for them, as I generally don't listen to straight up hardcore, so I guess there might be some hints of metal, thrash and perhaps even screamo but this is hardcore, plain and simple. They played all of their new EP material aka 'Separation Anxiety' plus some and also managed to smash a floor light, which wasn't so good as Matt was running around barefoot. I filmed the full set in one, 20-minute go and it is fucking intense. Check it out, as well as Alan's awesome guitar stance, Matt's incredible vocal range, Alan's spot-on drumming and Josh's slightly audible but awesome nonetheless bass playing.

HIERA
Garnering perhaps the most attention during their set, HIERA ripped through about five songs in 17 minutes before having to cut their last song short due to time constraints. Their very unique spin on screamo/hardcore is kind of like Queens Of The Stone Age's take on rock music: it's repetitive, grooving and almost robotic-like. This is a big compliment because I love how it all comes across, and it should also be noted that all this awesome, catchy, distorted noise is made by only two brothers. Definitely catch them live (with cowbell) and pick up their tape.