I'll be the first to admit that I unknowingly had my head in the sand regarding ALESKA for far too long. The band emailed me (as in Zegema Beach) in early 2019 to see if I was interested in helping release their newest 12"LP. I jammed it and was floored, quickly asking if I could do a cassette version alongside fellow French screamo band Yarostan. After doing further delving, I noticed that they started releasing in 2012 and literally every release has been excellent. I thought I had my ear to ground regarding French screamo/post-hardcore but alas it was an anthill.

Most bands start out with a sound and then branch out, eventually reaching their own, unique voice - assuming they don't break up first. In ALESKA's case it's like they this shit mapped out years in advance, as although the sound is honed with each release, debut 'The Waiting' EP is more than obviously the same band as 2019's 'Construire ou détruire'. Honestly, there isn't really much to improve upon since that initial EP. It opens with the decent "Growing elitism" before getting even darker with "The wait". Closer "Turtle race" is the penultimate track here as it balances a beautiful intro with playful screamo and heavy'n'harsh hardcore...but I mean c'mon, at times I got lost and thought I was listening to Kidcrash because there is so much variety on here.

The following year (which would be 2013 unless my math is off...hardy har har) ALESKA was included on a three-way split with Mariesena and Bears with two tracks of completely different makeup. "...and we are not afraid of eternity!" is a rip-roaring good time of raging hardcore with a plethora of screaming while "Friends and foes" is nearly four times the length and is more like a life story, complete with relaxation, anger, beauty, chaos and a touch of math class. Both tracks are fantastic but completely different. They also released a single titled "We don't believe in Santa Claus anymore" that takes the cake as the shortest and most intense ALESKA track recorded to date.

In 2014 they released another three-track EP, this time titled 'Time is a curse', which is the first release to really encapsulate everything the band had done well up to that point, fleshes them out, and displays them as something that really feels like a complete piece of work. Opener "Erased from the map" sounds like something Jesse Mowery would write combined with Potence so this is definitely my favourite of the three. "Passengers" begins like a Hundreds Of AU song before dipping into post-hardcore with singing.

Following a year of silence ALESKA came back in 2016 with their first full length, aptly titled 'LP'. "Instaurer le vide" has an epic build and is an obvious choice for opener, mixing influences from Black Love, Rosetta and Sed Non Satiata that plays out swimmingly. "Du gris au noir" is a menace, taking the cake as best song on here as it'll leave you gasping for air come 1:45. "De la cime au cimetière" has fantastic guitar interplay following the two-minute mark and a driving, epic conclusion that will leave you both satisfied and spent. "Leaves, trees and me" is a swirling, instru-metal affair for nearly five minutes, and then the band lays waste to the song, holy hell. "Que reste-t-il?" is pretty frantic and reminds me of Marée Noire, especially in the vocal department. "Our illusion is creation" has quite a few slower, chill moments but at 3:54 and then it doubles in size, splits and you've got two, gargantuan screaming elementals battling it out. Wait...what? Eh whatever. Closer "Combler le vide" has strong Rosetta vibes with all dem spacey guitars and whatnot, making this a very strong album through and through.

So it was 2019's 'Construire ou détruire' that threw me through a loop, as the 8-track album is phenomenal. Following a brief introductory interlude ALESKA drop the best song they've ever written with "Indispensibles", sounding like a pissed off Daitro and, strangely enough, Yarostan's new material to boot. The swing at 48 seconds is unbelievable and would get my hairy booty a-shakin' if I ever get to see it live, and is the catalyst for a sensational guitar progression that cuts through the dual vocals at 1:10. The instrumental shift at 2:10 is a lush and layered time-bomb that explodes right before three minutes is truly epic fashion...then the double-screaming kicks in again and I'm fucking dead. Seriously this song is fucking ace. "Vanite Illusoire" is a post-everything track that gives me Aporia and Respire feels, as does the massive, epic "La Derniere Lueur" that keeps it cool for the first four minutes but cannot contain itself thereafter. "Construire" is another lengthy track at 7:16, expertly mixing clean vocals and screaming, always keeping it interesting and creating a nice middle-ground that is neither too soft nor too heavy. Next up is the short "Un Eternel Recommencement" that packs a punch in less than three minutes like only a French screamo band could. Second to last is the behemoth also known as "Detruire" weighing in at 9:24. Due to the length of the 12" the final song from the LP is included as a bonus track, but appears on the Zegema Beach Records cassette version, and thank science for that because "Quand la lumiere disparait" is probably my second favourite tune as it spends its time teetering between tranquil deep space post-hardcore and crushing post-metal...uhhhhh so Rosetta? Fuckin' great album, I say. 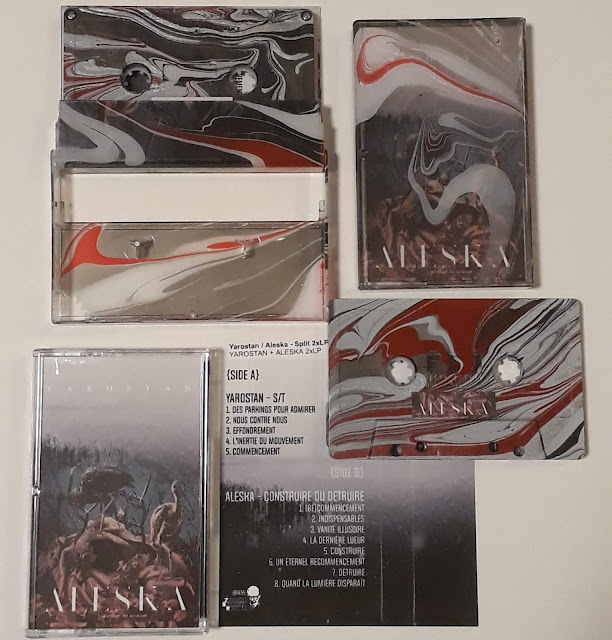