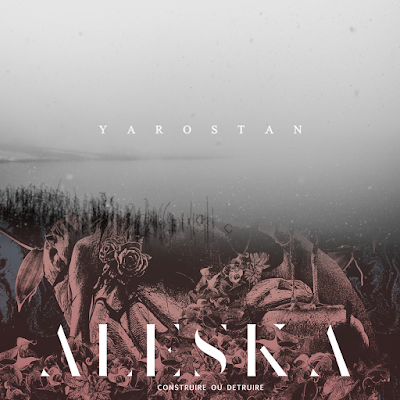 What happens when two amazing screamo/post-hardcore bands from France ask your label to help release their LPs but you're short on cash? You do a split cassette with each band's LP on either side, I guess. Cuz that's what I did after I heard YAROSTAN's 'Yarostan' and ALESKA's 'Construire ou détruire' a month or two ago. Both bands deploy dual vocals, swelling post-hardcore with explosive screamo and remind me of Daïtro, but in different ways. The former branches into some clean vocals territory while retaining a driving, screamy and passionate foundation, and the latter reaches both ends of the heavy/soft spectrum but incorporates some harsher vocals and expansive arrangements. Honestly, both albums are fucking amazing and well worth your time.

The tapes from Zegema Beach Records are up for pre-order above and should ship in late April. I'm only making 50 copies as both bands have 12"s coming of their respective solo LPs. ALESKA crowdfunded their 12"s while YAROSTAN will self-release their solo tapes, cds, and have a whack of labels helping release their 12" which include: Bus Stop Press (Marseille), Crapoulet Records (Marseille), Smart & Confused (Paris), Seaside Suicide Records (Le Mans), Longrail Records (Carmagnola), DIY Bikepunk (Salamanca), Badmood Asso (Marseille) and Atlas Music. ALESKA's 'Construire ou détruire' will be available in full March 26th with the 12"s coming in late May, most likely, with order links coming any day now. The band recorded and mixed the record themselves in true DIY fashion, although honestly it sounds better than most in the production department. YAROSTAN's 'Yarostan' releases in full later this week.

(2019) YAROSTAN "L'inertie du mouvement" (from 'Yarostan')
This is the fourth of five tracks and is a wonderful balance of screamy Daïtro and French emo-pop like 12XU. There's a nice, soft intro that explodes at the 22-second mark and then switches back and forth between the singing and epic screams until 1:04 when the song hits full speed and you'll catch some similarities to another amazing French band by the name of Amanda Woodward. It chills out substantially by the halfway point and lush acoustic guitars weave a sleepy tapestry that puts the track to rest.

(2019) ALESKA "Indispensables" (from 'Construire ou détruire')
This is the second of 8 tunes on the ALESKA side and holy shit is this song a banger. Opening with drums that meet up with a guitar every few seconds until the drumroll has every instrument, including screaming, latching on by the 25-second mark. There's a dual-vocal/dancey swing at the 50-second mark that floors me, and the urgency continues with a fantastic spacey riff layered over it the second time, not unlike Vi Som Älskade Varandra Så Mycket and Les Deux Minutes De La Haines. By the song's midsection we are met with a substantial slowdown, spoken word vocals and by about 2:13 the guitars fly back in like alien ships dancing in the night, twinkling and creating a beautiful auditory opus that climaxes at 2:55. This epic conclusion continues for almost a minute-and-a-half like a runner burning the take before the end of a run, and completely exhausts itself just past the finish line at 4:20.
Bandcamp
Facebook