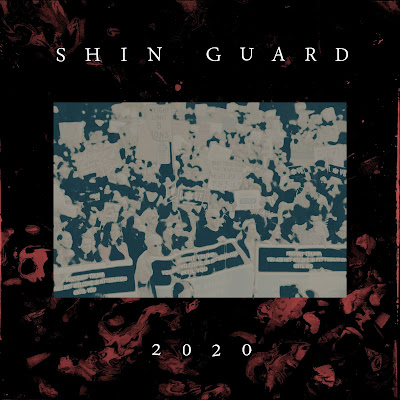 SHIN GUARD are from Pittsburgh and recently released their '2020' LP to much praise in just a few weeks. Let's take a quick gander, shall we?


"Motorcade" is situated around a biting, Entrana-esque riff that one of my friends said could have belonged on the first Alexisonfire record. There's a lot of variety on here, as sometimes I'm reminded of Comadre and other times United Nations (those vocals) and at the end there's even a spacey outro.

"Epiphany" is heavier and more direct, giving me a New Ruins feel but the vocals occasionally dip into Circle Takes The Square territory. A member cited Edhochuli as a riff influence and it is very apparent halfway through with some mean solos.

"Soliloquy Of The Hourglass" a poem wrapped in a song that tears a hole in the space/time continuum at 1:50.

"Kennedy" moves into the straight-up screamo lane and creates a lush build that explodes at the one-minute mark and incorporates dizzying riffs. Best song? Probably. There's even some Dallas singing during the last 20 seconds.

"2007" is like Kid Feral on ambien, but also has attributes that make me think of State Faults. It has a very progressive second half, and it even has some growls over the breakdown/sweeps.

"Sure" is another well-constructed tune that relies on its structure more than lavish riffs and noticeable sections. The guitars in particular do a great job of carrying the song and remind me of some Swedish stuff like Young Mountain and Vi Som Älskade Varandra Så Mycket.

"Spears" is the shortest track at 2:10, and is aptly named as it is a menacing, dangerous and searing explosion that is laced with venomous shrieking.

"You Will Be Held Accountable For Your Actions" opens all lounge jammy with a saxophone and sleepy, sung vocals that remind me of Hum.

individual videos coming soon, youtube is being dumb, so here's the full album: