IN MEMORIES
"the lion and the lamb"
exclusive song premiere 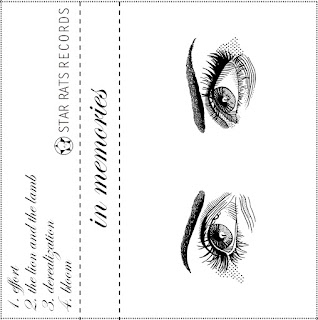 For fans of: A Day In Black And White, ...And Its Name Was Epyon, Big Water, Kowloon Walled City and Under A Sky So Blue

My friend Aaron who played in Under A Sky So Blue sent me their new band's EP a few weeks back and I was smitten. IN MEMORIES is a bit of a powerhouse as they contain members of Dim, Leery, Fishmonger in addition to Under a Sky so Blue. The four songs housed on 'in memories' are dark, raw and punishing with all songs hovering around the two-minute mark. Tapes will be available through Star Rats Records and will be premiered in full through Idioteq.com on March 13th. Today's premiere is for the second track "the lion and the lamb", check that shit out!


(2019) IN MEMORIES "the lion and the lamb" (from 'in memories')
At a mere 2:03, this track is packed full of goodies. Instrumentally the band resembles the styling of Under A Sky So Blue, but the primary vocals are broken yells/screams not unlike Kowloon Walled City. It opens with a lone guitar riff that meets up with everything after a quick run-through and bares its teeth. The first bite is taken out of the listener at the 36 second-mark with dual vocals that push the song towards its first breakdown. They take a bit of break during some note ring-outs that assemble to create a violent, gnashing conclusion during the final 35 seconds.
Posted by Dave Norman at 09:46