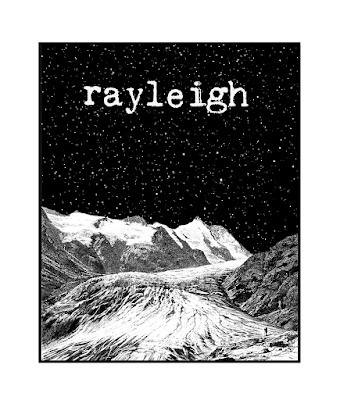 pre-order cassettes from Zegema Beach Records:
in the U.S.A.
Canada/International

Back in 2014 Zegema Beach Records helped release RAYLEIGH's first recordings with the 'Rayleigh' cassette (long since sold out), so it seems quite fitting that ZBR and RAYLEIGH are teaming up to make 50 copies of their final, posthumous EP titled 'Last Word'. Today we are premiering the final of four tracks, titled "Diamondback". If you love that head-scratching technicality of Itto, Nuvolascura and Mahria then you may just have found your new favourite EP of 2019. Seriously, all the songs are at least this good.

I asked Paul (guitar) about the release and they responded with, "Definitely influenced by bands like Ampere, Loma, Itto. We tried to play things that were as challenging as possible while still holding it together and making it sound like music." You can catch the full premiere on April 16th via our friends at Captured Howls blog. The tapes will ship on that date or before and are available for pre-order now in the U.S.A. as well as in the Canada/International store, which you might want to jump on as each store has less than 10 swirled marble copies each. Members can now be found playing in Obroa-skai and Parliament Of Nerves. Enough info already - to the song!!!

(2019) RAYLEIGH "Diamondback" (from 'Last Word')
The final track on this EP is also the longest, although only by about 10 seconds, and weighs in at 2:18. I was tempted to count the number of parts in this time but decided against it...now I kinda want to...ehhhhh, fuck it - I just counted 26 but don't take my word for it. Anyhoos, this opens at full speed and has quite a few stops, shifts and unexpected turns in the first 30 seconds alone. After that the dueling guitars begin their battle and lead the song to an angelic, twinkly section 52 seconds in which eventually explodes somewhere around the one-minute mark. The climax comes during the final section that really lets loose come 1:30 with dual vocals that sound like Obroa-skai mixed with math class. Honestly this song is amazing. This EP is amazing. This band was amazing.

OMSB 'If History' review
Posted by Dave Norman at 00:53