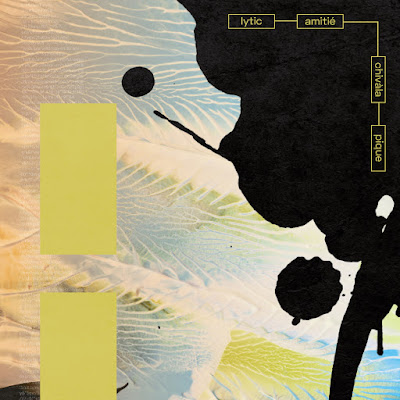 For fans of: ...And Its Name Was Epyon, Lessener, Le Pre Ou Je Suis Mort and Shin Guard

I am stoked to bring you along the second leg of the PREMIERING, a four-blog collaboration to bring you four new songs from each band on the upcoming 12"LP split coming out on Zegema Beach Records, Moment Of Collapse and Shove Records in spring/summer 2019 featuring beautiful art by Natty Peterkin (Cassus) on 300 12"s over two variants. You can take a gander at a brand new tune from each band by following the Premiering circuit. You can start here (at stop #2) and work back around to #1 or just start at Captured Howls who begin the circuit with Lytic.

As you have probably noticed, I am premiering (and interviewing) AMITIÉ. The band used to be called Tall Ships Set Sail and shares/shared members with Agapé, A Mola Mola, Terror Eyes,
Worst Days, Giuseppe and Paper Planes.

A pretty long jam, this take on emo definitely does its own thing and sounds similar to no single band. It opens with some epic post-hardcore stuff before taking a breather and inserting dual vocals just before the one-minute mark.

In addition to the song premiere, I figured I'd interview Matthew Morale, as he is a good friend who plays in AMITIÉ and essentially orchestrated this entire split.


You kinda orchestrated this split, so what started it?
The idea stemmed from the Massa Nera, amitié and Lytic split back in January 2017. Jamie and I had been shooting the shit via text for a while, toying with the idea of a split between Worst Days and Lytic. That eventually dissolved and turned into a 3 way split between Lytic, Elle and amitié. Soon after Elle dropped the project for their own reasons(timing and recording) and we decided to even it out by adding two other bands.

Pique was the last band added to this project, and man am I stoked they agreed to be a part of this! Jamie had recommended Pique to me back in August 2018 and I instantly was drawn to their fast style screamo.

Let's be real, what's it like being on a split with Jamie Behar?
Getting to know Jamie over the past couple years has been really sweet. He’s an awesome individual and we typically end up talking about random things and topics or music we’ve both recently found. I remember reaching out to Lytic on instagram, about setting up a Worst Days and Lytic tour, while I was on a 4 day thru hike with the guitarist of amitié, Josh. Didn’t expect him to respond with a yes as far as my tour inquire went and from there on our friendship bloomed into really awesome relationship. I remember hosting Lytic in PVD at As220 and Jamie and Frankie dubbed me their “band manager” because I had, at the time, booked at least 90% of their shows.

So to answer your question, I’m ecstatic to share this split record with Jamie and Frankie!!

Would you say this split came about more through love of each other's music or friendship?
There’s no doubt I love Saetia and Off Minor, that’s a cold hard fact.  But working/playing shows/hanging out with Frankie and Jamie before definitely aids to the fruition of this split.

Were your songs written with this split in mind? And why the name change?
After the gang decided to get back together and play shows as Tall Ships Set Sail, we started to write new material, 3 songs to be exact. These songs are the two on the split and our single release on Bandcamp “Overtoun Mink”. The feel and the tone of these songs resonated with the group differently than the TSSS songs. It just didn’t feel like the same band. Thus amitié was born. The new name also marks the transition of me moving to bass guitar and sharing vocals responsibilities with Trever and Josh.

What caused "the gang to get back together"?
I think we all just had a hankering to play music together again.

What's up next?
As for what’s next, we leave May 5th for a ten day stretch with our friends in Mališa Bahat and Chivàla. We will play Miss The Stars Fest in Berlin and Ultimate Screamo Fest in Warsaw, among several other shows in Germany.

In August we plan to make our way to Canada to play a weekend of shows, including New Friends Fest.

Annnnddd we hope to have an LP recorded by the end of 2019!

Thanks to everyone who helped make this 4way split come to life <3
Rock on and thanks Dave!
Posted by Dave Norman at 08:03