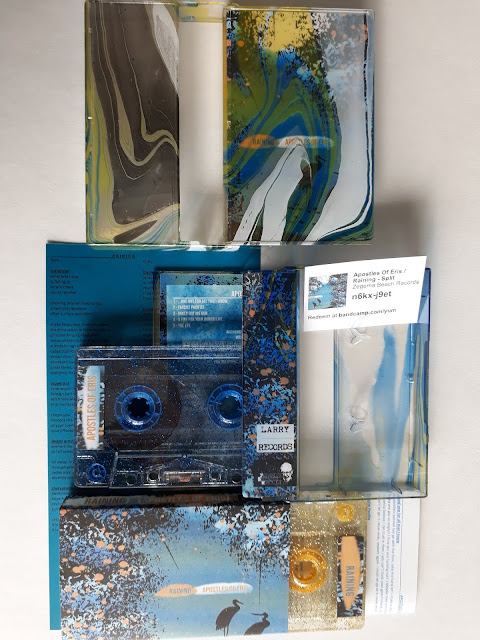 For fans of: Altar Of Complaints, Raein, Cease Upon The Capitol, Sinking Steps...Rising Eyes, Caught In The Fall and In Loving Memory

order in the U.S.
order in Canada/Internationally

Spoiler alert, I am biased. For I do some of the vocals for APOSTLES OF ERIS as well as run the label that released it (Zegema Beach Records) and I'm friends with the members of RAINING because two of them played in Emo Lendvai with me. That being said, I think I know my stuff, and I like this stuff. Very much, actually. So does Eric who runs Larry Records as they are coreleasing it.

The APOSTLES OF ERIS side is instrumentally the most screamo thing I've ever been a part of, and lyrically/vocally what I am most proud of to date. Jesse Mowery does all the instrumentals including the drums on a real kit. He is one of the most passionate, friendly, honest, caring and hilarious people that I've ever met and sharing this music with him is more than an honor. Opener "...and one for all that I know" has guitars that give me goosies every time I hear that Via Fondo-esque intro, and the swing post two-minutes with those spacey lead riffs are unreal. The clips in "Fascist Pacifist" are from The Dark Knight and the song boasts a chorus that I dare say is one of the heaviest, angriest things I've ever written. Oh, and when Jesse fires off that lazerbeam of a riff come 1:43 my legs get all wobbly and I get butterflies in my stomach. No song has made me cry as much as writing the lyrics for "Mikey Got His Gun", which is about my brother's destructive cavernoma that robbed him of the use of 3/4s of his limbs and left him in a wheelchair at 32 years old. It's our longest and most varied track, and instrumentally reminds me of European screamo/post-hardcore with a ton of layered vocals. I even tried out some spoken word stuff inspired by bands such as Sed Non Satiata and Amanda Woodward with a questionable degree of success. "A fire for your horrid life..." was the first track we wrote together for this split and is about my utter revulsion at the ideals, education, hate and greed brought on by anything related to what Asshat Trump is associated with. Closer "The Eye" is a relatively straightforward screamo jam with a heavy swing around the one-minute mark that bleeds into a build that hits full stride at 1:45 before the post-rock/strings outro.

The RAINING side is, honestly, much better than I had anticipated as they gained two members since their previous endeavor and both add their screaming to the mix, bringing the total number of vocalists to four. Think In Loving Memory crossed with Sinking Steps...Rising Eyes and you're pretty much there. Opener "blanktree" is a whirlwind of screaming and chaotic instrumentals with a 90s emo midsection and I fucking epic/groovy conclusion. "inoperant" is similar albeit shorter and screamier with an excellent use of the sax. "two mirrors" is the subdued interlude by way of acoustic guitar and some spoken word before the intoxicating rhythms of "sleepy ernst" hit, and that cut/transition at 1:55 to the isolated groove is remarkable. Closer "chervonenkis in the swamp" is a sad, awkward and depressing affair that is also the sides longest track at 4:58. The band has an LP and another split coming out, one would presume in 2019.

Apostles Of Eris/Raining premiere on This Noise Is Ours

Podcast w/Jesse of Apostles Of Eris

Podcast w/Tom of Raining
Posted by Dave Norman at 14:33