'The Ugly Art' by: MACHINE GIRL 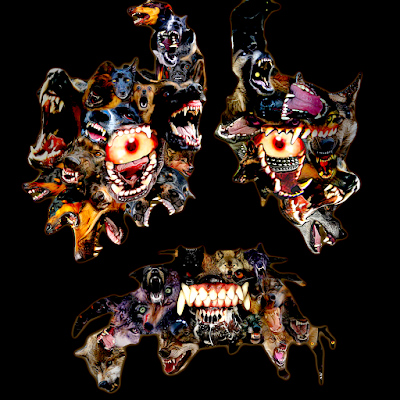 BUY tape from Kitty On Fire

My friend Henrietta who helps run Kitty On Fire asked me if I'd be interested in reviewing the new MACHINE GIRL album which they helped release, and I said I'd check it out, but I don't really do electronic music. So here we are...and quite obviously I was more taken with the band's 16-track 2018 endeavour 'The Ugly Art' than anticipated. Therefore, before we get to the review, it should be noted that I don't haven't the foggiest fucking clue what I'm talking about.

Now that we got that out of the way, I get a strong The Prodigy vibe mixed with those punk kids in High Fidelity from MACHINE GIRL, and it sounds even better than that may read. The album is apparently the first to use live drums on recordings and boy oh boy do they sound great. MACHINE GIRL's sound is buttressed by a myriad of influences, with the most obvious that I hear being electronic, jungle, house, 8-bit, noise and punk.

Being a listener not seasoned to the sounds of anything on this release, I found myself quite intrigued with some tracks and uninterested in others. I did notice that perusing other reviews of the record that the songs I don't deem that great seem to be long-time listener faves, so take all of this with a hefty chunk of salt. I did not care all that much for the noise/ambient tracks such as "Loop Version", "Where Were You?" and "NWOFKA Skullboy", but I'm a picky SOB who knows what they like.

And what I like, is the following. First, "Fuck Puppet" is awesome. That shit screams The Prodigy to me. I love the yelled vocals, the blippy anchor, but most of all I love that goddamn shockwave sound they incorporate, with it even delivering aftershocks that are more devastating than most metalcore that I hear. Go to 1:18 to hear what I'm gushing about. I like the inclusion of so much variety, as each song generally scratches many an itch. I like the scattered tribal sounds, mostly tied to the drums but occasionally branching out further, with the midsection of "This Is Your Face On Dogs" being a good example. I love the blast through excessiveness just before the three-minute mark in "Kill Screen", which is what I assume a rave would be like on speed and ecstasy. When "Status" started I thought I was jamming a song from the Mortal Kombat soundtrack (that's a compliment) whilst playing Wipeout XL for Playstation (that's just a weird personal reference). I also love the broken vocals that appear halfway through the song as well as the dark, screamy hardcore vocals near the close. Actually, the vocal delivery is one of my favourite things about MACHINE GIRL, which is much more shouted, yelled and screamed than I would have anticipated. The placement of said vocals can be an infectious hook in themselves, even if it's just spoken word/talking. Some good examples would be the end of "This Is Your Face On Dogs" ("Eyes on the prize One foot in the grave No rest for the obsessed Keep sharpening your blade,") the repeated line in "Full Metal Dipshit" ("Jesus Christ never been so full of life taking someone else’s life,") and the chorus of "Fuck Your Guns" ("Fuck your guns lesson number one Don't be such a male, man! going postal sucks Fuck your guns lesson number three learn Some fucking empathy and play with your own squishy.") For frequenters of this blog I would highly recommend checking out "Necro Culture Vulture" with is definitely the heaviest track with a lot of screaming and general chaos. I would be amiss not to mention the prodigious beast that is the closing track, "A Decent Man", which also happens to be one of the best songs on here and incorporates most of the stuff I like into 10:25. Very cool stuff! Grab a tape here.