...AND ITS NAME WAS EPYON

Band: ...AND ITS NAME WAS EPYON

Label(s): Learning To Be Loved 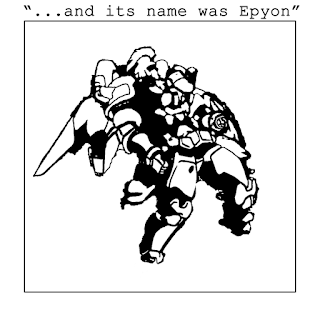 ...AND ITS NAME WAS EPYON is a new band from Los Angeles that released their Gundam-inspired, late 90s/early 2000s influenced screamo earlier in 2018 and I've been fucking smitten ever since. The band released their self titled EP digitally, with a split tape following soon after with a member's noise/ambient project Without. The three songs continue to make the hairs on the back of my head tingle and the band has told me that they have already written their next material which should be released in the near future. Keep an eye out for those, as they are apparently in line with the sound initially developed on their debut release.

Speaking of their debut release, '...And its name was Epyon' begins with "War in the Pocket" and a very odd sound clip, followed by frantic, driving and intense screamo not unlike People's Temple Project, Robots Don't Cry and Eyes Of Verotika. There are a plethora of dual vocals, soft ambient bits with Level Plane-esque clean guitars, all followed by destruction set to a beat. "Dark Histories" is an eerie, atmospheric jam with distant wails leading a slow build that climaxes in a payoff that gives me chills. I love the lyrics and placement of everything in the second half, especially that line that may or may not be "Everything hurts, the memory turns to grey" and the subsequent, broken screams/chaos that ensues. "Return to Forever" is the most emo of the trio, utilizing the wailing to a more extreme degree and combining them with twinklier, more upbeat instrumentals, in contrast to the dark ambiance of the previous song. After the two-minute mark the song crashes into its wildest moments and carries the listener forth on the shoulders of an anthemic, screamy close.

What a fucking debut, holy shit.

2018 - ...and its name was Epyon / Without split cassetteEP (stream/donate/download here)

...AND ITS NAME WAS EPYON additional links