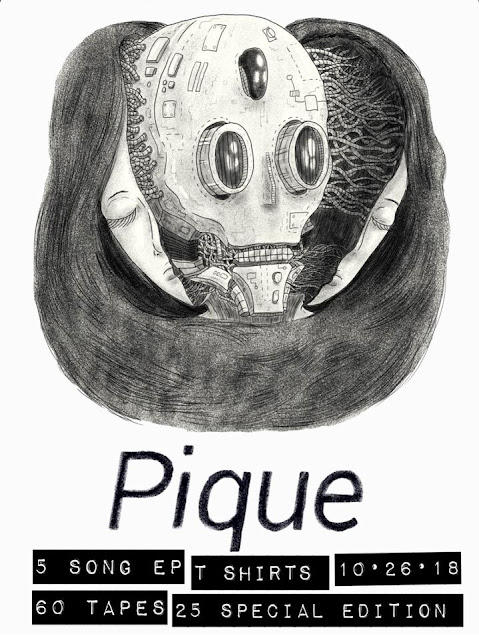 I was informed of PIQUE's existence when my good friend Eric (drummer in People's Temple Project) shot me some demos of their new project with them on guitar. Eric had just recently released the Nayru tape on his new label Larry Records. The three-piece play a lo-fi, throwback screamo style which ends up sounding like a loose mix of Indian Summer, Funeral Diner and Eric's other band People's Temple Project. Each song is about one to five minutes and will bash you over the head and lull you to sleep, or the other way around. The five songs were record at Jam Rock Studios and recorded/mixed/mastered by John Shields. There are 65 cassettes (25 of them are special editions with a patch and koozie) and an additional format release of mini-cds by Friendly Otter. Mike Giurato also made 25 shirts that the band will have for sale. Very cool stuff!

The opener has a light motif, using clean guitars and yelly screaming to create a welcoming but still aggressive introduction. The spoken word section bleeds wonderfully into the climax/close at the one-minute mark.


(2018) PIQUE - 2 - "In a Position of Power" (from 'לוֹט')
This song begins much more like a PTP jam, with rolling drums, a wall of guitars and fully screamed vocals. This song is only 1:10 but it packs a punch and brings The Flying Worker to mind.


(2018) PIQUE - 3 - "So Much Rope" (from 'לוֹט')
The lulling intro guitars for this song pique (ha) my interest immediately, and once the vocals and speedy drumming all line up it begins its ascent to the best song on here, as from the midsection onward the song takes a chill pill (save the last 20 seconds) and creates an eerie, moody, damp atmosphere that gives me all the feels.


(2018) PIQUE - 4 - "Our Lot in Life" (from 'לוֹט')
Perhaps the most chaotic of the five is the second last track, bringing to mind Funeral Diner during the all-out intro and Lautrec for the relaxed section. A very good song and the longest on the EP, which also happens to include a C-3P0 quote from A New Hope.


(2018) PIQUE - 5 - "These Five Lakes Can't Hide You" (from 'לוֹט')
The closer boasts dual vocals and a cool stop/start dynamic that does an excellent job of propping up the first 30 seconds before getting pretty dang epic, with a outro not unlike European screamo.

Nayru cassette/30 in the Zegema Beach Records distro
Posted by Dave Norman at 08:40