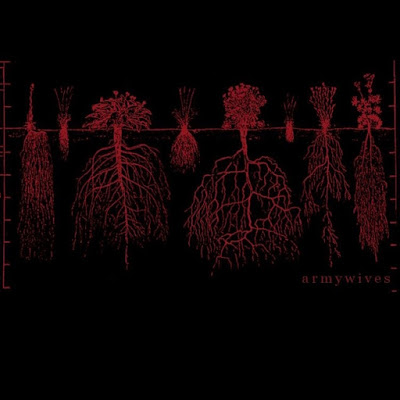 I don't really know what to say about ARMYWIVES...except maybe, why aren't people freaking out about this band? The Brooklyn/Philly band has been playing together for 10 years and their new EP was so good that I immediately asked to release it on Zegema Beach Records. My automatic go-to for reference points are Kidcrash and Eyelet, so you know this shit is jazzy and epic/screamy. The tapes are set to arrive later today, then I gotta dip 50 (and leave the other 20 as transparent pink) so they will start shipping out late April from the Canada store and mid-May from the U.S. store. Missed Out Records is also releasing some 7" lathes so be on the lookout for those!

Enough info, go jam these songs then head over to a bandcamp near you and nab that digital EP stat.

(2020) ARMYWIVES "est cette vie?" (from 'armywives')
Opener "est cette vie?" let's you know what the band is all about in two minutes flat. It opens like your favourite Kidcrash jam, weaving in and out of pretty/jazzy bits and powerful, driving, Loma Prieta-esque screamo.


(2020) ARMYWIVES "est-ce la mort?" (from 'armywives')
Nearing three minutes is "est-ce la mort?" which is more rooted in expansive, dense post-hardcore than jazzy screamo, but the execution is flawless, making the track as strong as any on the EP. Maybe a bit like 'Old Pride' era Pianos Become The Teeth.


(2020) ARMYWIVES "able" (from 'armywives')
I'd probably call this the fire track, as it consumes me like a crispy forest and decimates every time. The song brings to mind Eyelet, Frail Body and Dowager, bands that straddle the epic/jazzy/melodic trifecta, with an ending that fucking slaps.

(2020) ARMYWIVES "first you must die to be reborn" (from 'armywives')
The only song to be released previously (on Caleb's fantastic Captured Howls) is vastly different from the first three, as it relies on a single repetition and is nearly double the length yet it still manages to shoulder the most epic of the EPs weight. The back-and-forth, dual, anguished screams that are slathered over the dreamy soundscapes carry the listener into its climax come 1:35, with a truly exceptional explosion at 1:55 that exponentially becomes unstable until it tears the song apart, reverting it back to the opening repetition.