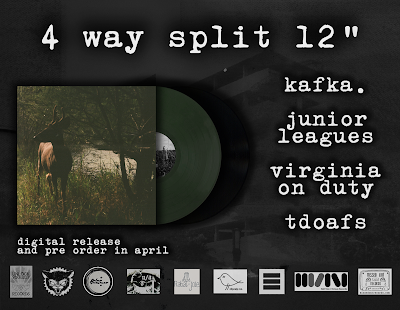 pre-order tapes/50 from No Funeral here

I've seen this incredible 4-Way 12" split between Kafka., Junior Leagues, The Discord Of A Forgotten Sketch and Virginia On Duty in the works for a few months now, so it's with great enthusiasm that I share a song by two of the bands. You can check out Guillaume's premiere at Le dictionnaire de l'emo of the other two bands (Kafka and Junior Leagues) here. The 12" will be released on both black and transparent green/black smoke via Unlock Yourself Records (RUS), Seitan's Hell Bike Punks (FRA), Polar Summer (RUS), Never Again Records (RUS), Les disques Rabat-joie (CA), Zilpzalp Records (GER), Non Ti Seguo Records (ITA), Hell Vice i Vicious (FRA), et Missed Out Records (US) and tapes on No Funeral Records (Canada). Without further ado, here are new tracks by VIRGINIA ON DUTY and TDOAFS!!!

(2019) VIRGINIA ON DUTY "detainee" (from '4-Way' split)
Good lord, these Malaysian heavyweights never disappoint. I fucking love this band and their two tracks rip. This is the second and longer of the two, laying on the dark, screamy hardcore with a ferocious close. Perhaps my favourite song on the entire split.


(2019) TDOAFS "altered forever" (from '4-Way' split)
This long-running Quebec band dishes out three tunes, this being the first. The yelled vocals remind me of A Day In Black And White, with the instrumentals not being far behind. The mathy/disjointed section that starts at 42 seconds is killer, as is the dreamy, drum-led part that follows. Without a doubt one of the best TDOAFS songs.

VIRGINIA ON DUTY discography review
Posted by Dave Norman at 19:09