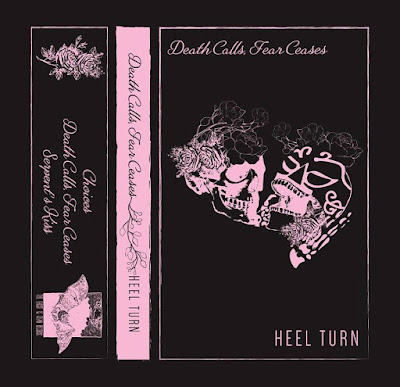 Year: 2019
Label: The Ghost Is Clear Records
For fans of: Medusa, Combatwoundedveteran, Mother Of Mercy, Full Of Hell and Daughters.

My friend Bobby Johnson from The Ghost Is Clear Records turns me on to all kinds of awesome stuff, today's being HEEL TURN's new cd and cassette EP that is the precursor to an upcoming 7" split with Ekumen. It features a member of Dead Heroes and friends devouring the listener over three tracks of dirty, raw and seething hardcore. Opener "Choices" rides an eerie guitar into town surrounded by death drums, with the vocals chiming in when the rest of the band meets up with the leader 30 seconds in. The vocals soon drop into a distorted snarl that'll take chunks out of your eardrums, making this a romp of 80s themed Alabama hardcore. The title track "Death Calls, Fear Ceases" is a fucking behemoth and not what I was expecting at all. Over 7:12 it crashes around like an noise prototype, smashing into walls seemingly randomly but injecting a heavy amount of experimental noise and ambiance. In the end it kinda feels like a seven-minute nightmare that may or may not have been influenced by new Daughters material, as the last half sounds like the cumulative audio of our complete annihilation. Closer "Serpent's Kiss" is the shortest song and is driven by some seriously cavernous bass and pretty sassy vocals. The shift at 30 seconds to more straightforward hardcore with a hook is very welcome and perhaps my favourite bit of the EP. Check out their debut EP 'Territories' here and be sure to catch their release show on March 1st, 2019 in Huntsville, Alabama, linked here.