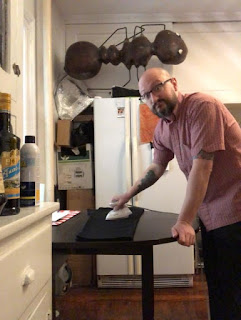 Somehow I ended up here, finding myself in a conversation with Jamie Behar of Saetia, Off Minor and Lytic (as well as a few others, all named in this podcast). It's nice that I'm not really nervous talking to my personal heroes now, or this would have been a mumblin', stumblin' mess of a podcast. It's also nice to know that Jamie has a giant ant living in his place. He also seems to be a big fan of ironing pants. After ironing on January 9th, 2019 Jamie was kind enough to give me almost two hours of his time to talk about some bands that led him to the influence and sound he developed with Saetia, Off Minor and now Lytic.

I have broken the podcast into three 35-45 minute parts, the first of them premiering today. Part 2/3 will go up late February with 3/3 coming in early-mid March, hopefully right in time for the split 7"s with Shizune to start shipping. Speaking of said split 7", you can listen/donate/download here and pre-order from Zegema Beach Records in the US here or Canada/Internationally here.


(2019) LYTIC "Lugenpresse" (from 'Shizune' split)
buy split in the U.S. here or in Canada/Internationally here

1 (no music)
a bunch of OFF MINOR talk, as well as a bunch of Jamie's other bands